Whatever you like to do on a vacation, you will probably be able to do it in Yuma, Arizona. Are you interested in early American pioneer and military history? Do you enjoy soaking up the culture and art of a very distinctive, multi-cultural community? Do you appreciate hiking or walking through the pristine terrain of a Southwestern desert?  Do you relish excellent restaurants and rollicking bars?  You will find all this and more in Yuma, which is an easy three- to four-hour drive from just about anywhere in Southern California. You can also fly into Phoenix and drive to Yuma in about three hours. Or you can even fly right into the Yuma International Airport.

When I mentioned to friends that we were going to spend four days in Yuma, the reaction ranged from “why” to “what are you going to do?”  I am here to tell you from a recent fascinating experience that there are many reasons to visit Yuma and there is lots to do.  Yuma is a perfect getaway for a family or any visitors who are looking for an adventure offering a variety of activities appealing to all age groups and interests.  Well known as an agricultural hub that produces about 95 percent of the nation’s winter lettuce, Yuma is also an historical and cultural mecca.

Yuma is located at the crossroads of the Colorado River, which for centuries has been a major water source for much of the southwestern US and Mexico. Early Native American inhabitants were dependent on the river and it was a key resource as the West expanded and railroads were built. Because of the river, Yuma became a major stopping place for explorers and travelers moving west.  Often called “the sunniest city in America,” Yuma has become a destination in recent years for visitors from colder climes looking for warmth and sun throughout the year. 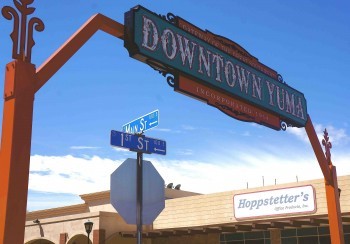 In this article, I want to give you an overview of some of what Yuma has to offer and what you might want to do during a three- or four-day visit.  A few strolls up and down Yuma’s Main Street, which is full of interesting shops, galleries, bars and restaurants, is a must. Everyone we met in Yuma was proud of their city and obviously loved showing it off.

There are several options for comfortable accommodations in Yuma. We were fortunate to be hosted by John and Yvonne Peach, owners of the Best Western Coronado Motel, the oldest surviving Best Western in the country, which was established in 1938 by John’s parents. The Spanish style motel has expanded over the years and is located on the site where the first airplane landed in Arizona. We were particularly impressed with the Casa de Coronado Museum on the grounds of the motel in the original house on the property. The museum is full of intriguing memorabilia depicting the history of Yuma and the motel. The motel rooms were charming, clean and comfy. 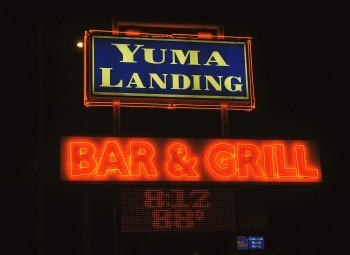 We also enjoyed delicious, full breakfasts every morning at Yuma Landing Bar and Grill, which is part of the hotel. The Grill is open for lunch and dinner and features pasta, seafood, steaks and other dishes, many with a Southwestern twist. Servings are ample and delicious.

For a late afternoon drink, make sure you try the special cocktails in the Captain’s Lounge connected to the Yuma Landing Bar and Grill.  We tried two special drinks. One was The Chevala, served to us by Bartender and sports guru Jeremy Contreras. This is a traditional Yuma drink, an innovative take on a Bloody Mary, and includes freshly squeezed lemon and lime juice, celery salt, pepper, olive juice, Worcestershire sauce, Tabasco sauce, clamato juice, and Bud Light or your beer of choice.  The other cocktail to try is the signature drink of the bar—La Diablita de Yuma, otherwise known as  “The Little Devil of Yuma.” This luscious drink, with just the right sweet, spicy kick, was created and served by mixologist Kilee Hood. She made the drink with strawberry vodka, jalapeno tequila, cranberry juice, and a splash of lemon juice, attractively served in a rocks glass and creatively garnished with Chinese chilies that looked like horns.

A wine tasting at Yuma’s Main Squeeze, Southwest Arizona’s only producing winery, is a great place to relax with a glass of local wine and enjoy some appetizers. And try breakfast or lunch in the enchanting outdoor setting at Garden Café & Spice Co, which features a creative menu of mostly organic salads and sandwiches. The Quechan Casino and Resort’s elegant restaurant, the Ironwood Steakhouse, is the ideal place for special occasions with a wide variety of delectable entrees and cocktails. (We celebrated our anniversary there and it was the perfect place for a special toast.)

An absolute must for lunch is funky Lute’s Casino on Yuma’s Main Street, another place chock full of Yuma memories and even some current day cowboys and cowgirls hanging around the bar. Again, the food and drinks were ample and everyone in our group enjoyed their lunches.  We also relished another wonderful dinner at the Hills, the restaurant at the Desert Hills Municipal Golf Course. 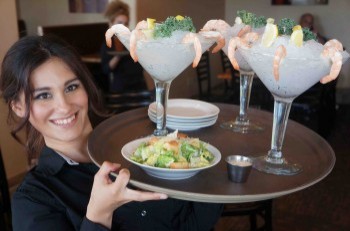 The course is beautiful and city-owned so it’s open to the public. We especially enjoyed having a cocktails while we watched the sun set from the restaurant’s patio overlooking the golf course.

But we didn’t just eat and drink in Yuma.  We spent our days visiting a variety of captivating sites, including the following, which are my suggestions for a 2-3 day visit to Yuma: 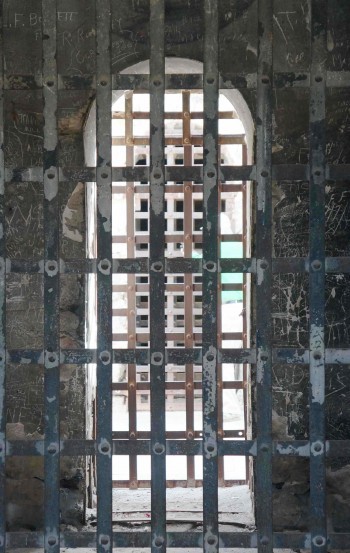 The Yuma Territorial Prison was the Arizona Territory’s first prison, subject of the famous movie “3:10 to Yuma,” which held its first inmates in 1876 in cells they built themselves. It is now a fascinating museum with the original strap iron cells and displays about the criminals who stayed there. While it was understandably a dreaded destination for prisoners, written records indicate that prisoners were treated humanely. A total of 3,079 prisoners, including 29 women, lived at the prison during the 33 years it was open.  An interesting fact is that Yuma High School got its team name, the Criminals, from this famous prison because classes were actually held on the prison grounds in the early 1900s.

Yuma is well known as an agricultural area and dates are among its most important products.  David Mansheim, manager of the Bard Date Company and President of the Bard Valley Medjool Date Growers Association, gave us a tour of a majestic grove of palm trees, where we learned all kinds of intriguing facts about dates.  Did you know that there are both male and female date trees, with 50 females for every male?  The males provide pollen for the females.  Tours of date groves are available by appointment or once a month on Saturdays. (Just call The Bard Date Store at 928-341-9966 for details on tours.)  Later in the day we savored scrumptious date shakes at Basket Creations & More, the Bard Date Store in downtown Yuma. 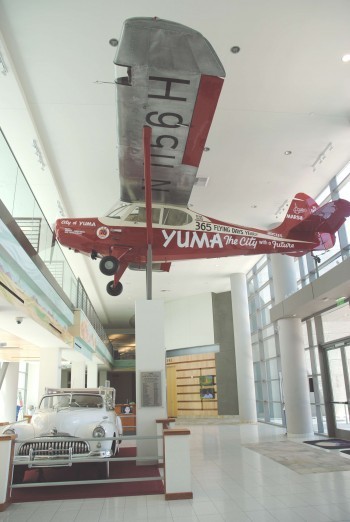 Aviation is prominent in Yuma’s history. The first airplane to land in Arizona, a Wright Brothers plane, landed in Yuma in 1911. Another first is the “City of Yuma”—the plane that set a flying endurance record in 1949.  Piloted by two former Navy pilots, the plane set a world record by flying for 47 consecutive days, as it was being refueled by a 1948 Buick convertible that passed fuel tanks up to the plane while it was in flight. This promotional effort was aimed at proving that Yuma was a flying hub with great weather every day of the year. The actual  “City of Yuma” plane and a Buick similar to the one doing the refueling can now be seen in Yuma’s impressive City Hall along with a video about how this endurance record was accomplished.

Walking around the Quartermaster Depot State Historic Park is taking a step back in time. Original 1870s buildings still stand from an important era in Yuma history when troops on horseback were kept in remote forts as they fought in the region’s Indian Wars.  Steamboats brought supplies to this depot to serve forts all over the Southwest. A walk around this site is an enthralling venture back in time. Be sure to finish your tour with a piece of scrumptious pie and a cup of tea at the Back in Time Pie Shoppe, located right on the Depot grounds. 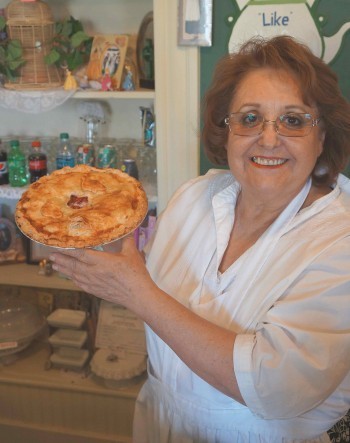 This outdoor exhibit at Pivot Point Interpretative Plaza is at the exact site where the first railroad train entered Arizona in 1877.  An actual steam locomotive sits on the original tracks.  This plaza preserves the original concrete pivot on which the rail bridge turned to allow boats to pass.  Nicely illustrated panels guide visitors on a walk through Yuma’s history and emphasize the importance of this Yuma Crossing National Historic Landmark.  There are even places to picnic here as you enjoy the view.

The 650-seat renovated Historic Yuma Theatre is wonderful to behold with its meticulous, art deco restoration. The theatre has new digital movie equipment and is the frequent site for films, live shows and musical groups. You can call ahead for a tour or to find out what’s going on during your visit. The connected art center reflects Yuma’s focus on the arts with four visual art studios, a pottery studio and a lovely gift shop full of creative gifts.

East Wetlands Park, a 1400-acre restoration area, offers many recreational opportunities for visitors, such as a 2.5-mile walking trail through areas of restored cottonwood, willow and mesquite habitat along the Colorado River. You can also visit a hummingbird garden, play with your kids on a magical playground, or even float down the river on a raft.

And there is more, too much to cover in one article.

So in answer to the question posed by friends before our trip to Yuma:  There are  plenty of fascinating places, restaurants and activities awaiting you in Yuma.  There is so much going on that your biggest challenge will be squeezing in all the enticing activities available.  We went to Yuma not knowing what to expect and left knowing that we will be back again and again.