A Wedding on Ocracoke

When my niece, Hana, announced that she was being married on Ocracoke, I knew I had to go. I had never been to this southern most of a string of barrier islands called the Outer Banks, off the coast of North Carolina. Not only did I want to share in Hana’s special day, but I was attracted to the rich history, natural beauty, and allure of this remote island. Hana and Jake chose Ocracoke for their wedding because Hana’s family had vacationed there many times as Hana grew up and it holds cherished memories for them. 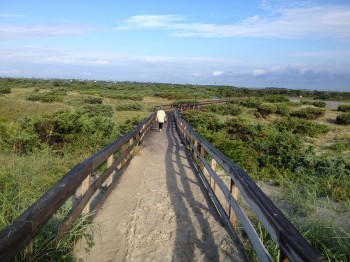 By the way — the island's name is pronounced “ocra” like the vegetable and “coke” like the drink.

Since I live in Southern California, I knew it would be challenging to reach this faraway destination, but it was a challenge well worth the effort.  All it took was two flights across the country, one long car ride, a ferry ride—and I was there. 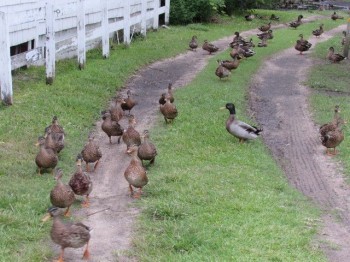 The minute I stepped off the ferry, I was enchanted by this far-flung island. It is a true getaway in every sense of the word.  I was captivated by the serene setting with 16 miles of windswept, undeveloped beaches, the salty air, the wetlands and marshes, the 400 species of birds, the friendly bars and restaurants, and the small harbor overlooking pristine inlets. It was a far cry from the hectic environs of Los Angeles where I had been just hours earlier. I found myself in another world.

For the first several nights, I stayed with my brother, Rick, and his wife, Yoko, in a cozy 1880s-era cottage, called Elsie’s Cottage, which they had rented for the week through VRBO. It had a warm and inviting living room, dining area with a large table, updated kitchen and three comfortable bedrooms.  There are many similar cottages to rent on Ocracoke and also several small hotels and B&B’s. 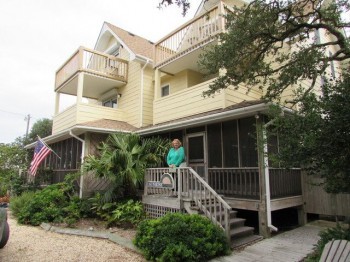 For the last two nights of my visit, I stayed at the charming Cove B&B.  I truly enjoyed my time there. My spacious suite had a luxurious bed and a pleasant, screened-in front porch where I hosted a small wine and cheese gathering for a few wedding guests. Some rooms on the second floor have lovely balconies overlooking the ocean.  The inn’s lobby was comfortably furnished and welcoming.

Late each afternoon, wine and appetizers are served in the lobby and each morning guests can savor a full, home-cooked breakfast.  The first morning I was there, Sharon Brodisch, the Inn’s personable and helpful manager, served us delicious eggs benedict and homemade coffee cake. 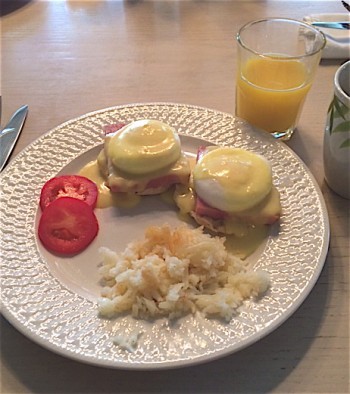 The second morning, since I had to catch an early ferry, Sharon thoughtfully prepared a wonderful breakfast-to-go of egg biscuits and fruit. Sharon also shares valuable advice with guests about where to go and what to see on Ocracoke. The inn has seven rooms, including three suites.  When I visit Ocracoke again, which I definitely hope to do, I plan to stay at the Cove.  Room prices are reasonable, ranging from $125 to $225, depending on the room or suite and the season. 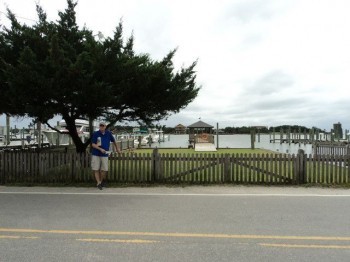 Most of our activities were centered around the quaint village of Ocracoke, located on Silver Lake Harbor. It almost seems like a small town from another era, untouched by the spoils of city life, although I must say I was glad that my cell phone worked wherever I went on the island and WiFi is readily available. You can walk everywhere (or bike) and enjoy the village’s quiet, sun-dappled streets, art-filled shops, excellent restaurants, wild gardens and historic cottages, many built with salvaged shipwreck materials.

Of course the highlight of my visit to Ocracoke was the wedding. It was a happy, hands-on event with many of us helping in the preparations. We spent the morning of the big day filling gift bags, making flower arrangements, and decorating the wedding cake. (Kudos to the bride’s mother, Yoko, who was very well organized for our wedding day tasks.) We also kept apprehensively checking the weather forecast and debated all day about whether the wedding should be moved from the planned, picturesque harbor setting to a less romantic but covered site. Just an hour or so before the ceremony was scheduled to begin, the decision was finally made:  we would take the risk and have the wedding outside. 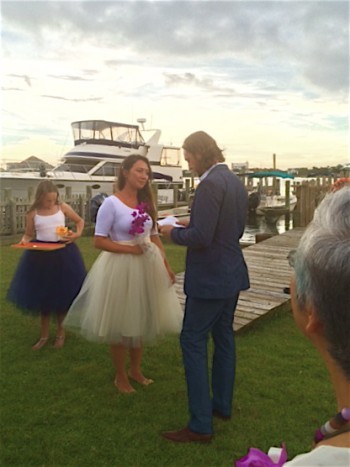 And so, Hana and Jake were married on a grassy patch right on the harbor on a beautiful, misty afternoon with rain clouds threatening.   As about 30 friends and family looked on, my brother (Hana’s father) eloquently conducted a meaningful ceremony while only a few sprinkles anointed the newly married couple right after they exchanged vows. As a tribute to Hana’s Japanese heritage, a traditional sake ritual called San-San-Kudo was a highlight of the ceremony. 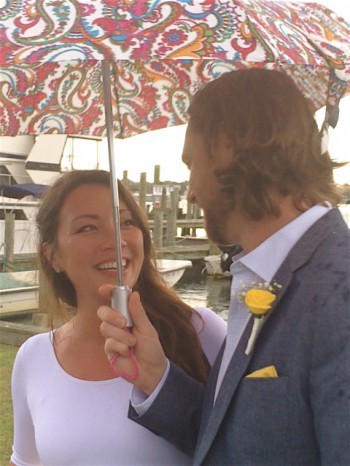 I felt this wedding was what a wedding should be:  a very personalized and heartfelt  sharing of vows with close family and friends. This obviously wasn’t a big, flamboyant, catered affair but a small, moving ceremony that was significant in its simplicity. I believe the inspiring island setting and the contagious love between these two wonderful young people inspired all of us there to focus on the relationships that are really important in life. I predict a long and joyful marriage for Hana and Jake. And the peaceful Ocracoke harbor setting was the ideal place for them to begin their lives together.

After the ceremony, we adjourned right next door to an outdoor patio at SmacNally’s Bar & Grill where we toasted Hana and Jake and were treated to delicious appetizers— including mounds of fresh shrimp, oysters and hush puppies.  We then ordered from a variety of enticing seafood options on the menu. (I ate nothing but wonderful fresh fish the entire time I was on Ocracoke.) And yes, the rain continued to sprinkle for a while, but we all kept mostly dry under umbrellas at the tables. (Except when my brother unintentionally tipped a torrent of water from an umbrella onto the groom’s mother’s lap. Fortunately, after the initial shock, she was a good sport about this unexpected drenching.)

Later most of the wedding guests adjourned to the Topless Oyster Bar where Karaoke was well underway and where many of the wedding guests showed off their considerable singing talents. This funky bar is open late, usually has live music, and serves a varied menu of burgers, seafood and, of course, oysters. (By the way, only the oysters are topless.) 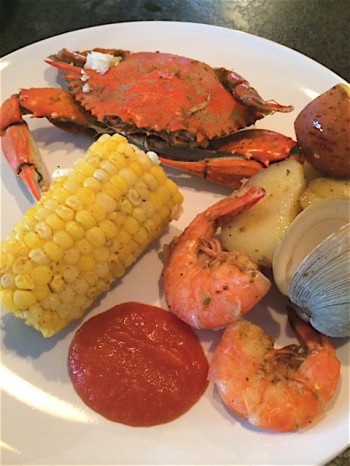 Ocracoke has a surprising variety of wonderful restaurants. We had our family dinner the night before the wedding at Dajio, where the steaks and seafood were excellent and the service was friendly and gracious. Earlier in the day, we had a delicious lunch at the Flying Melon where a few of us took advantage of some creative cocktail options. One night we enjoyed a fish fry on the large, screened-in, upstairs porch of Howard’s Pub Restaurant. Howard’s is an institution on the island and a must-visit place for casual dining. 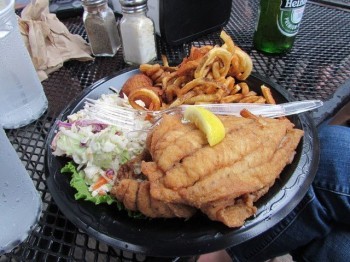 In addition to eating and shopping, there is so much to do and see on Ocracoke.  Many people rent golf carts or bikes to tour around the island, while others stroll along the beaches and many hiking trails. We admired the famous Ocracoke Lighthouse, built in 1823 and one of the oldest still-operating lighthouses in the US.  Its beam can be seen up to 14 miles out and we imagined what an important beacon it has been throughout the years as sailors tried to find their way through surrounding, turbulent seas. 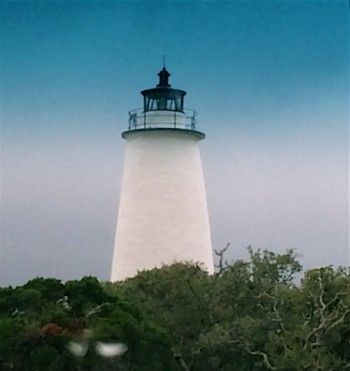 Ocracoke is also well known for its pony herd. These ponies, which are probably descendants of Spanish mustangs, used to roam free throughout the village and the islands but are now protected in a 180-acre enclosed area about seven miles from the village. While you can visit the ponies any time, it’s fun to go during their feeding time from about 7 to 9 a.m. in the mornings and 4 to 6 p.m. in the afternoons.

Everyone visiting the island should go to the Ocracoke Preservation Museum and learn about the island’s fascinating, seafaring history. You can also view photos and videos of the many hurricanes that have devastated the island throughout the years. In addition, I enjoyed an intriguing video and exhibit on Ocracoke’s distinctive vocabulary and brogue, which many feel had its origins in Elizabethan English. 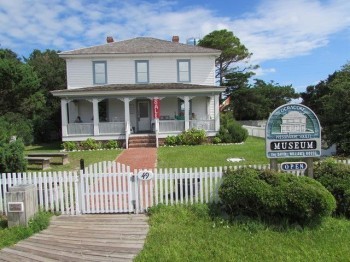 You will learn about the pirates who used to hide in lookouts on the island as they watched for merchant ships that they could plunder.   The notorious pirate, Blackbeard, died on Ocracoke in 1718 in a ferocious battle with British Navy troops. Elsewhere on the island you can find Teach’s Hole, Blackbeard’s favorite place to anchor. The lore of Ocracoke has it that before his capture, Blackbeard, hidden in his lookout and anxious for morning to come, cried out “O Crow Cock, O Crow Cock,” and some speculate that this is where the name “Ocracoke” originated.  But there are other more likely explanations for the origin of the name, which is also said to be a variation of its original name in the 1500s of “Wokokon.” 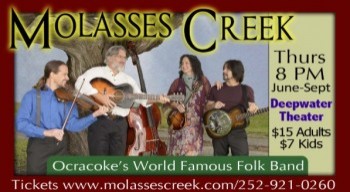 If you are lucky during your visit to Ocracoke, there will be a performance going on at the Deepwater Theatre. We were fortunate to enjoy a concert by Molasses Creek, a lively and engaging folk and bluegrass band that originated on the island but performs throughout the country, including on the popular radio show, Prairie Home Companion. The band beautifully captured the island’s spirit and way of life with its original and traditional tunes.

A highlight of the wedding weekend for Hana and Jake was a chartered deep sea fishing trip. They went out on a boat called the Devereux II with Captain Reid who provided the knowledgeable guidance they needed to pull in some big ones. 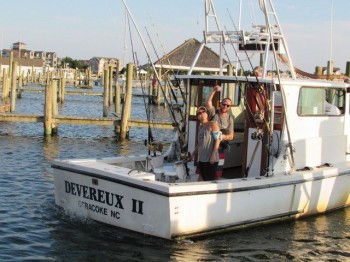 Hana caught three Mahi Mahi and Jake caught one, but he also caught a big Barracuda, which, according to law, had to be returned to the ocean.  As soon as they pulled into the Harbor, the mate on their boat filleted the fish and then SmacNally’s Bar & Grill  stepped in to cook their catch on the spot and then serve the delicious fish to family and friends. (Did I say fresh?) 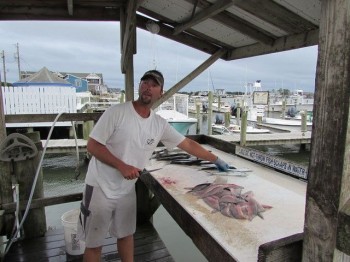 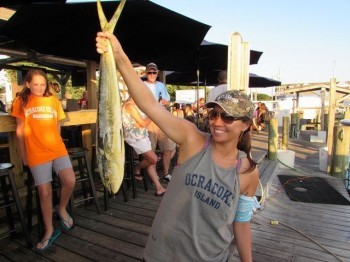 Ocracoke, part of the Cape Hatteras National Seashore, can only be reached by one of three public ferries or via private boat or plane.  A great part of the appeal of the island is its isolation. Almost any time of year is a good time to visit, although different seasons bring different experiences and challenges. The peak season from mid-May to mid-September is the most popular time for visitors. Before and after the peak season are also good times to visit because of somewhat milder temperatures and fewer crowds, although during late summer and early fall there is always the possibility of hurricanes. The off-season from mid-November to mid-April is much cooler, yet appealing because of the island’s solitude and stark beauty. And if you want a unique and memorable spot for a special occasion or destination wedding, think about Ocracoke. I’m certainly glad Hana and Jake did.