The Science of Molecular Gastronomy at Kitchen 23 in Punta Cana 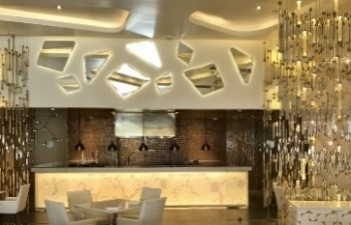 A Mojito Cocktail of foam, pastry pockets filled with creamy cheese foam, and prawns with foam of “leche de tigre” — all of these are part of the fun of Molecular Gastronomy at Kitchen 23 by Le Chique at Karisma’s Nickelodeon Resort in Punta Cana.

Just to fill you in on what Molecular Gastronomy is all about, it blends physics and chemistry to transform the tastes and textures of food, and addresses three components of cooking — social, artistic, and technical.

Chefs explore culinary possibilities by borrowing tools from the science lab and ingredients from the food industry. 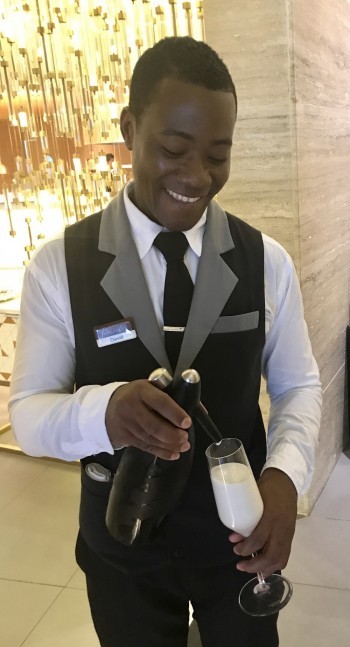 K23’s Executive Chef, Dayleny Dominguez, models this restaurant after Le Chique at Azul Beach Resort Riviera Maya, a restaurant that has garnered all kinds of prestigious recognitions. However Chef Dominguez’ inspirations are more Dominican Republic-based and hark back to her upbringing in that country. The country’s cuisine is derived from the French, African, and Taino Amerindian (pre-Columbian indigenous Amerindian inhabitants) cultures as well as a heavy influence of Spanish cuisine. By the way, the name, "Kitchen 23" comes from “2 + 3 = 5 senses,” all of which are used when experiencing food at this restaurant.

According to Chef Dominguez, one of the best parts of the meal is the welcome cocktail that comes in a siphon and is charged with Co2 canisters. We thought this Mojito Fizz was a lot of fun, and it surprised our taste buds because it tasted like a mojito but the texture was unique. 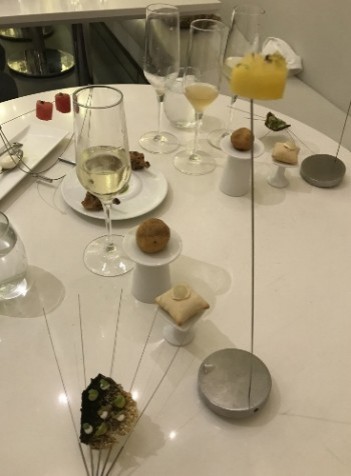 Once we had taken in the beautiful setting (see photos at beginning of article), we were amazed by our first course, a display of seven small bites elegantly and unusually displayed to whet our visual senses and stimulate our curiosity. This course consisted of two small squares of watermelon supported on a floating wire, a pineapple square infused with Mabi (a Caribbean tree bark-based beverage), Macao-style fish skin (in a Chinese sweet and sour application) served atop a five-pronged wire stand, an airy baguette filled with creamy cheese foam and guava jam that melted as you took a bite, a Chimi bun (Dominican bun) filled with spicy oxtail, served atop a small pedestal, and Pica Pollo (Dominican Deep Fried Chicken) with a cilantro sauce. What an impressive display, and I must say everything was full of flavor and gave us a delicious sampling of Dominican food.

The next course was a starter of a prawn ceviche covered in a leche de tigre (tiger’s milk) foam and a citrus-based marinade to cure the ceviche with an accompanying coriander oil. Fresh and delightful!

The soup, Sopion (also called Sancocho), the national dish of the Dominican Republic, came deconstructed with a bowl of vegetables and octopus, which arrived at our table with a small taco of twice-fried plantain. Our server poured over the savory and spicy beef  broth, creating the perfect way to see all the ingredients.

One of our main courses was a creative display of pork belly aside a scallop ensconced in a sauce of sweet pea and bacon air. The beautiful display replicated finding a scallop at the ocean lying in seafoam.

Since beef is so prevalent in this country, we were not surprised to see low temperature beef filet as another main course. One bite into the tender beef filet, surrounded by staples of sweet potato, plantain, and carrots with a caramelized onion sauce poured atop everything, filled our mouths with a hearty, earthy richness. 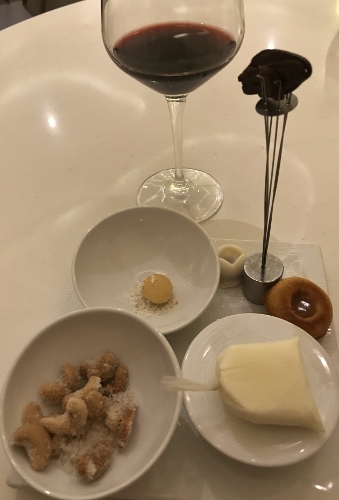 What’s a meal without dessert? Ours arrived on an oblong plate displaying Dominican Chocolate Coulant (a small cake with a melted interior) and an accompanying coffee ice cream.

But we were not finished, because the last course arrived — what they called Sweets—a chocolate pop atop a prong stand, cake with toffee, a rum truffle, and a small tied bag, which when bitten into released a spurt of  Morir Sonando Ice, the “Die Dreaming” drink of the Dominican Republic made of lime, rum, and evaporated milk.

Prior to our meal, we wondered if we would be full. We wondered if the tastes would seem strange to our palates. We had no idea what a Molecular meal would be like, and our curiosity was rewarded with a most interesting and delicious meal.