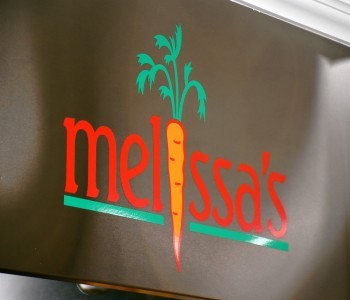 Imagine vibrant sweet strawberries, juicy succulent peaches, flavorful figs, melons with a hint of citrus, and tangy tasty plums. We tasted all these and more at Melissa’s World Variety Produce, the largest distributor of variety produce in the U.S., located in Los Angeles. Our group of food writers from the International Food Wine and Travel Writers Association visits Melissa’s quarterly to learn about and taste a seasonal bounty of fresh vegetables and fruit.  During this visit, we learned so much about peeling, preparing, storing, and savoring a variety of ripe and delicious fruit.

In Melissa’s test kitchen, Robert Schueller, Melissa’s director of Public Relations, was our entertaining and well-informed guide while talented Chef Tom Fraker, Manager of Melissa’s Corporate Kitchen, prepared some special dishes for us. Their goal is to educate the public about preparing and serving the wide variety of produce that Melissa’s distributes all over the country. We were impressed to learn that Melissa’s distributes more than 1,200 varieties of almost all organic fruit and vegetables with new items coming into season everyday. 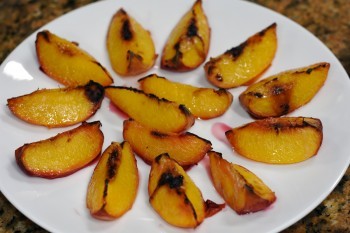 We first discussed stone fruit and had the opportunity to taste perhaps the juiciest, most delectable peaches I have ever tasted. These were exquisite peaches from the world famous Masumoto Family Farm, located about an hour south of Fresno, California. This variety of peach is called Flavor Crest—one of seven heirloom varieties of peaches grown for their flavor at Masumoto Farm. Melissa’s is the only retail distributor of these rare, uniquely delicious peaches with most of them going to high-end restaurants. Chef Tom served us luscious peach wedges that had been lightly sprinkled with sugar and briefly broiled, but eating them raw is heavenly too. 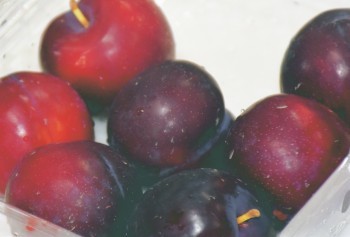 Plums were another stone fruit delicacy we tasted. There are many varieties of plums that each come into season about every two weeks during the summer. The most popular is the Santa Rosa variety, but we savored tasty varieties called Burgundy, which was fairly firm yet juicy, and Sugar Plum, which was brownish in color with yellow flesh. We also enjoyed tasting Golden Sweet apricots and flavorful Black Apricots, which are 90 percent apricot and 10 percent plum. Robert emphasized that apricots are the most sensitive of the stone fruits with the best apricots coming from California. We also loved the yellow-fleshed nectarines. 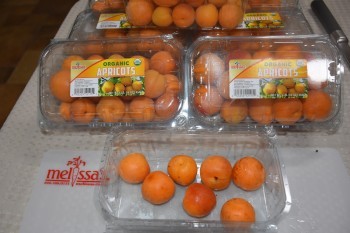 This is the season for these many different varieties of stone fruit and we loved indulging our senses of sight, smell, texture and taste as we discerned all the differences in these varieties.  Being an avid wine taster, I was thinking that there are many similarities between tasting fruit and tasting wine. Just as every varietal of wine has many variations, each kind of plum (or peach or apricot) has different characteristics. However, I think the general public may not be aware of these many distinctions in fruit varieties. My consciousness has been raised and I will be looking for these differences from now on.

Robert kept imparting helpful tidbits:  For instance, did you know that fruit should not be ripened in your refrigerator if you want to maintain its optimum flavor? You should only refrigerate fruit when it is ripened and ready to eat. Also don’t stack stone fruits on top of each other since fruit can easily bruise and become moldy before it is even ripe. We were also interested to learn that a little salt goes well on fruit and is a growing trend. 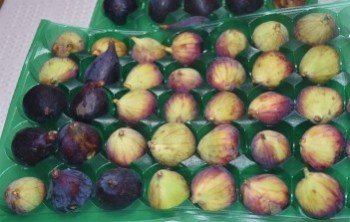 Next we learned about different varieties of figs, and tasted Brown Turkey figs and Black Mission figs. Chef Tom had prepared rich, savory bleu cheese stuffed Black Mission figs wrapped in prosciutto. I plan to prepare this wonderful treat as an appetizer at a home dinner party soon. 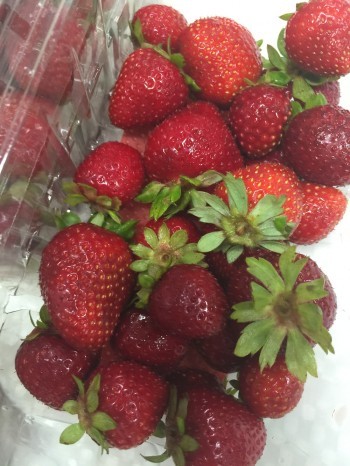 We moved on to vivid red strawberries. I’m hesitant to be so effusive about so much of the fruit we were tasting, but there is no other way to describe Harry’s Berries but to say that the Gaviotas variety we tasted was sublime. These incredibly sweet berries are grown in the Oxnard Valley and, again, Melissa’s is the only distributor.  We relished these berries and also a refreshing strawberry lemonade that Melissa’s kitchen staff had mixed up for us using these special berries. 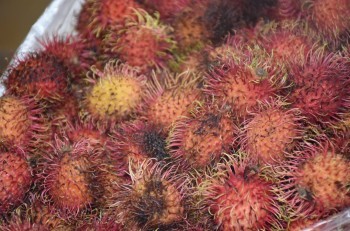 We also had fun tasting some tropical favorites: lychees and rambutan from Guatemala.  Robert showed us how to peel these somewhat intimidating fruits and then pop the delicious flesh right into our mouths. The rambutan, in particular, was not something I would have attempted to eat without Robert’s encouragement—since it looks like a sea urchin with its hairy, prickly skin—but they were delicious. 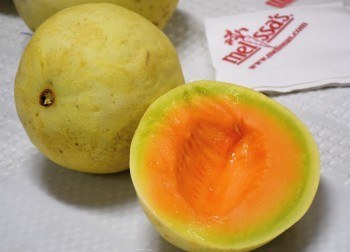 On to the melons. We learned that there are more than 16 different varieties of melon, not just your standard watermelon and cantaloupe, and that they all have distinct flavors. Robert cut open several of these melons for us to taste. We tried sweet Orange Flesh Honeydew melon and zingy Lemon Drop melons that had a wonderful sweet/tart taste. Robert pointed out that there are numerous melon varieties available in many grocery stores, each with distinguishing flavors, including Charential, Korean, Crenshaw and Galia. I’ll be looking for these melons in the grocery store. 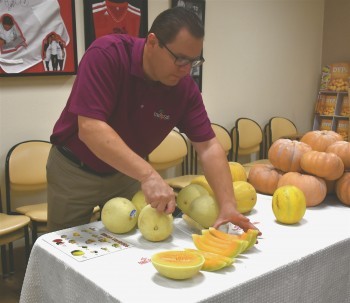 Another good tip from Robert: Be sure you wash melons and all fruit very carefully before cutting into their outer skins. Even though you will just be eating the flesh of the melon, the cutting process can carry bacteria or chemicals from the outer skin into the flesh. Again, he advised that it is critical for melons to ripen at room temperature. Otherwise, they will go into a coma, and you will lose much of their flavor. And who wants a comatose watermelon?

We were surprised to see pumpkin-like squash on Melissa’s table of goodies. We learned these are called Fairytale Squash and are primarily grown in Mexico. They can be prepared just like pumpkin but have their own distinctive flavor.

Robert then shared a variety of nicely packaged “superfoods.” These are food items that are more nutritious and have higher levels of antioxidants than other fruits and have not been highly processed. We brought home Cocoa Nibs, Chia Seeds, Aronia Berries, Dried Mulberries, and Goji Berries and have been snacking on them and also sprinkling them on salads and pastas. Besides being good for you, they are tasty and unique.

Departing briefly from the topic of fruit, Robert presented a beautiful display of seasonal, colorful red and yellow peppers and gave us a lesson on choosing peppers. Did you know that female peppers have four lobes and are sweeter than male peppers, which have fewer seeds and are less sweet?  (I think I’ll buy girl peppers from now on.) 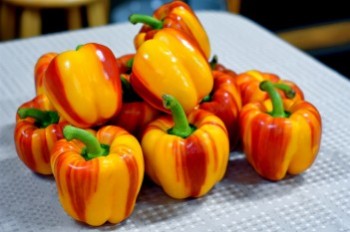 So as consumers, how do you find produce from Melissa’s?  You have probably been purchasing and enjoying their produce all along since many times grocery stores put their own labels on the produce they sell and some of Melissa’s produce has different brand names.  Some specially packaged items may have the Melissa’s label, such as the delicious, pre-packaged roasted Brussels sprouts we took home. I personally find it comforting to know that such passion and care goes into supplying much of the produce we buy and enjoy.  Thank you Melissa’s. We’re looking forward to sampling your fall bounty in a few months. 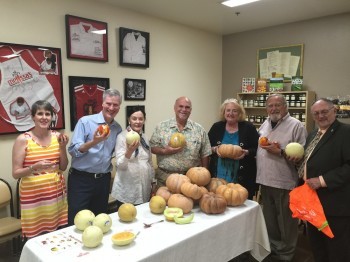