Memphis is known worldwide for great barbecue. So why were we driving about an hour northeast of Memphis to the tiny, mid-Tennessee town of Brownsville for barbecue? We were picking it up for my son David’s birthday party held on a recent Saturday night in Memphis. The theme of his party was Beer, Bourbon and Barbecue. (You have to know David to know how perfect this party theme was for him. The only "B" word we could add to that description is "Bacon.") He had picked up some unique growlers full of local beers from The Growler in Memphis and chosen his favorite bourbons, but David was determined to have actual pit-smoked pork shoulder for his birthday and it had to be from Helen’s BBQ in Brownsville.

Helen Turner is one of the few female pit masters in the country and her BBQ is unique among the wonderful BBQ options in and around Memphis. Her specialty is pork shoulder, which is smoky and tender with a sweet and spicy sauce. I learned that BBQ’s smoke ring is the layer of pink meat under the crust (known in BBQ circles as bark) and in Helen’s meat that smoke ring is deliciously infused with hickory smoke. 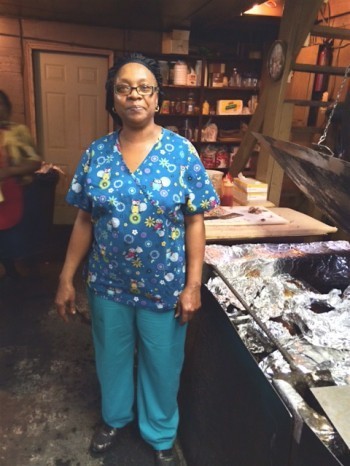 Her place is off the beaten track in a cozy, simple building with her pit ilocated in a charred wooden structure in the back. On one side of the building she burns the hickory logs down to glowing embers. She does not use any charcoal, just freshly-cut hickory. Then she transfers the embers to the actual pit where the pork shoulder is smoked for many hours. This is a labor-intensive process where timing is all-important and requires the touch of an experienced pit master like Helen. The result is juicy, flavorful pork with nice bits of crispy outer crust.

Helen was a long-time employee of the previous owner when she purchased the business 18 years ago and she has been establishing a growing reputation for her distinctive smoky BBQ ever since. While I was waiting for my son to return from the cash machine (Helen’s only takes cash or checks), several dedicated regular customers came in to pick up their own barbecued treats. Helen’s is obviously a popular stop for BBQ connoisseurs.

It’s no wonder that in March 2013 Helen was named “Reigning Queen of Pig and Smoke” by the Southern Foodways Alliance at the Charleston Food and Wine Festival. This was the first time a woman had ever been honored with that title. She was also recently invited to participate in a BBQ demonstration in San Francisco. Helen has been garnering widespread recognition, but her greatest love is making barbecue for her many devoted fans.

Much of her business is carry-out, but she also has a few tables in her small shop for eat-in customers and also an outdoor eating area in the warmer months.

We also picked up the perfect BBQ accompaniments, including Helen’s homemade potato salad that tasted like potatoes mixed with deviled eggs, crisp slaw with a mustardy twang, and savory baked beans made with chunks of fatback and bits of shredded pork and green pepper.

Needless to say, this feast was a huge hit at the party that night, especially when washed down with some local Memphis beers such as Wise Acre Tiny Bomb Pilsner, Ghost River Copperhead Red, Memphis-made Reverberation Coffee Stout and High Cotton ESB.

We then topped the evening off with some of David’s favorite bourbons such as James E. Pepper’s 1776, Eagle Rare, W. L. Weller’s 12-year-old Bourbon and Bullet Rye which is not actually a bourbon but still very tasty.

As most of my readers know, I live in Southern California, but I’ll never find barbecue like this on the west coast. Fortunately, there are direct flights to Memphis from Los Angeles that only take about 3-1/2 hours. Then an hour car ride after landing will get me to Helen’s BBQ. That means in less than 5 hours I can savor open pit smoked pork shoulder again. I’ll be back for sure.