Irvine Offers the World on a Plate

Since the population of Irvine, California, is about 40 percent Asian, it’s no wonder that this destination is the place to go for authentic and delicious Asian foods.  Many of the area’s wonderful restaurants are located at the Diamond Jamboree, a lively and diverse retail center that offers more than 20 enticing dining options, including Korean, Vietnamese, Taiwanese, Chinese, Japanese and Thai. 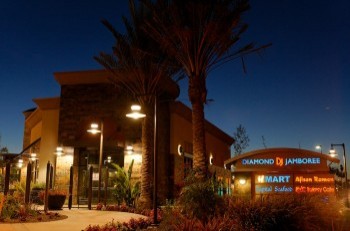 Located in the center of Orange County, just 45 miles south of Los Angeles and 90 miles north of San Diego, Irvine is easily accessible when you get that craving for Asian food—as I do frequently.

So we were thrilled when our International Food Wine and Travel Writers Association's regional group was invited to a lunchtime dine-around sponsored by Destination Irvine. Todd and I had already tried SWSH Shabu Shabu, which features a popular Japanese dish where thinly sliced meats, fish and vegetables are “swished” in a cooking pot of boiling kelp water. We frequently make special trips to Irvine just to enjoy this favorite restaurant. Now we were ready to learn about additional appealng dining options in Diamond Jamboree. 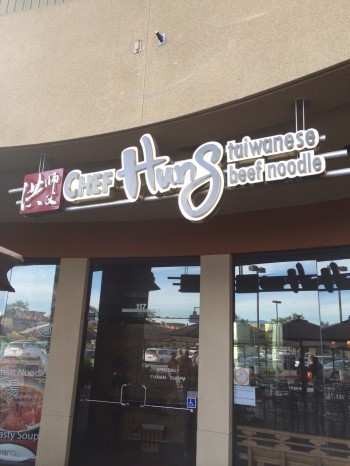 Our first stop was Chef Hung Taiwanese Beef Noodle where we learned from our host, Eddie Huang, that “beef noodle” is a dining category with a long tradition in Taiwan. In addition to its only US location in Irvine, Chef Hung Taiwanese Beef Noodle has ten other locations in Taiwan, Shanghai, Beijing and Vancouver. Chef Hung has won many awards in Taiwan and is very involved in overseeing the dishes offered at all the restaurants with his name. Eddie explained to us that a goal with Taiwanese food is to achieve three textures: smooth, crunchy and springy. We actually found all three of these textures in most of the dishes we tried. At the Irvine location, the restaurant obtains almost all its meat and vegetables locally and recipes reflect what is seasonally available. The emphasis is on healthy items with low salt and no additives. There are also many gluten-free options.

We started with a zesty Bean Curd Ribbon Salad, made primarily of Napa cabbage, which was crispy and flavorful. At the same time we took bites of a spicy, marinated Cucumber Salad.  We each ordered some uniquely flavored iced teas and also sampled soothing, aromatic, hot black tea. I ordered a Rose Green Tea that tasted like luscious floral nectars while others really enjoyed the most popular tea in the restaurant, Passion Fruit Green Tea. Several unique appetizers also appeared on our table, including crunchy fried chicken wings, green onion pancakes, and shredded dried pork and egg wrapped in a crispy pancake. 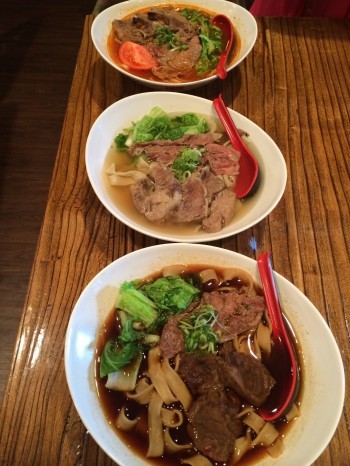 The tender noodles were particularly delicious and, no wonder, since they had been handmade at the restaurant, but getting the noodles out of the bowls was a challenge. I found that chopsticks actually worked best for the noodles and learned that the scissors on the table had a purpose. Just cut off the noodles as you pull them out of the bowl and then slurp them down fast. A spoon then helps you enjoy the savory broth.  So some of us, inexperienced in the art of eating noodles, did end up with a few dribbles down our shirts, but no one cared since the dishes were so heavenly. We also found that the sour cabbage served on the side of each noodle dish added a tartness that brought out the flavors of the soups.

For dessert we enjoyed a warm Mashed Red Bean Cake, which easily met all the Taiwanese texture requirements: The dough was springy. The bean mixture was smooth and the toasted sesame seeds topping the cake were crunchy. The idea of bean cake has never appealed to me, but I’m glad I ventured a taste because I found I really enjoyed this dessert.

But our feasting at the Diamond Jamboree was not finished.  We then took a dessert break to cleanse our palates before embarking on our next lunch. 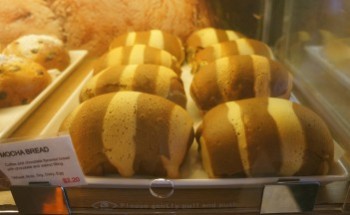 We were treated to an abundance of decadent and scrumptious baked items at 85°C Bakery Cafe, a gourmet café and bakery with Taiwanese origins that features gourmet coffees, flavored beverages, decorated cakes, baked goods, and pastries. This bakery has more than 750 locations throughout in the U.S., Taiwan, China and Australia. Padi, the personable store manager, explained that the Diamond Jamboree location was the first U.S. location to open six years ago and there are now 14 locations in in the US. The bakery gets its name because coffee holds it flavor best at 85 degrees Celcius (185 degrees Farenheit). All items are baked fresh daily (sometimes hourly) onsite. 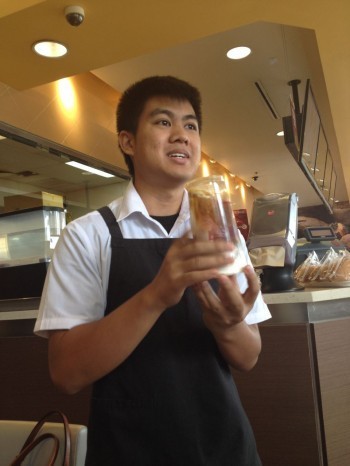 There are more than 100 kinds of pastries, rolls and breads available and we were able to sample a great variety of delectable treats, which were not only unique and delicious but were beautiful to behold. We also relished a sea salt, iced coffee that we learned how to shake just right so that all the flavors melded to create a truly distinct coffee drink that I may just drive back to Irvine for again and again. We learned that the sugar cream cheese brioche and the marble taro roll are among the most ordered items, but I really loved the savory, cheesy pastry roll with a surprise hot dog inside. I have never been to a bakery like this anywhere and I really felt like I was far away at an authentic bakery in Asia. 85°C Bakery is a must stop for anyone traveling near Irvine (or to Hong Kong where my daughter lives). 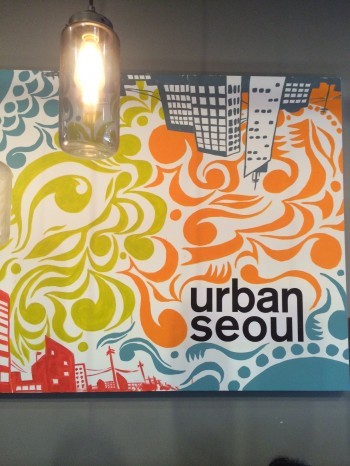 Now that we had refreshed our palates with a sweet fix we were ready for our second lunch of the day at Urban Seoul, the brilliant creation of Orange County’s restaurateurs, Bronnie Lee and Chef Kacy Jun.  The minute we walked in, we encountered a happy lunch crowd and knew we had found a stylish hot spot in the Diamond Jamboree. The exuberant vibe was contagious as we were seated at a long table and the dishes started emerging from the busy kitchen. 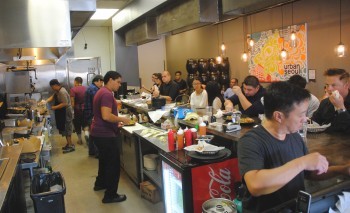 The menu is an exciting fusion of traditional Korean, Southern Californian, and a variety of other ethnic culinary heritages. There are two menus: Seoul Food includes innovative Korean items and Urban Food features tapas and small plates with a mix of influences, including Mexican, American, Korean, and Japanese.

Chef Andre Valenzuela, the Executive Sous Chef, was our enthusiastic guide to the creative dishes presented to us.  The dishes we tried were inventive and full of surprising flavor combinations, but I think the first dish may have been the best: a seasonal Pozole. This rendition of the famous, traditional Mexican soup featured pork belly, pickled cabbage, hominy, thick noodles and tangy Mexican spices. All of us agreed we would come back again and again for this unique, special soup. Next we were served a trio of colorful appetizers, including Elote, grilled corn drizzled with paprika, cotija cheese, chili flakes, cilantro and lime; Japchae Mari, stir fried glass noodles wrapped in seaweed that had been battered and fried; and Tteokbokki, a puffed rice cake that is popular in Korea. 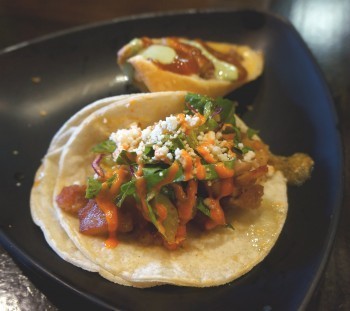 Then from the Urban Menu, since it was Taco Tuesday, we savored the Pork Belly Taco accented with lettuce, kimchi, queso fresco and hot sauce. This was a one-of-a-kind taco—and one of the best I’ve ever tasted. We were also treated to a delicious Smoked Tri-Trip Chimichanga made with contrasting hot, sweet and sour sauces. And, as if we were not already convinced of the wonderful flavors possible at Urban Seoul, we were amazed at the Urban 3b, the restaurant’s version of traditional Korean bibimbap, a mixed rice (including purple rice) bowl that included spicy shredded pork, lettuce, cabbage, radish, fried onions, carrots and a poached egg mixed with a sesame oil with chili paste. 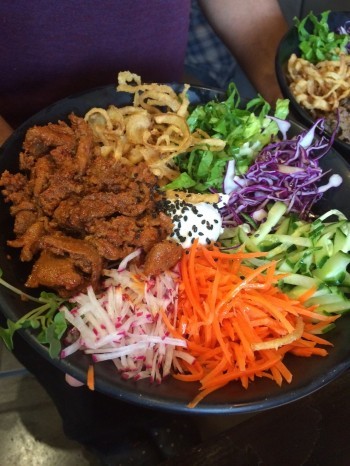 This was a beautifully presented and flavorful dish. The dessert of Mexican Bread Pudding soaked in Soju (a Korean rice liquor) and topped with Crème Fraiche took me over the top and I had to take most of it home, but it sure was delicious later in the evening.

Besides these three great dining options, there are so many more reasons to return to the Diamond Jamboree. There are few destinations where you can find so many globally-focused, authentic, fascinating dining and shopping options in one place. Diamond Jamboree is located at 2700 Alton Parkway in Irvine. For more information go to Diamond Jamboree’s website. A second location is located at 414 Spectrum Center Drive.