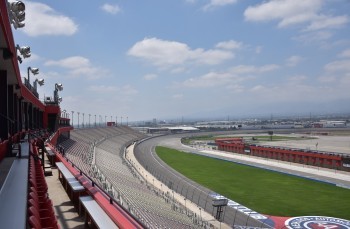 The track is fast—one of the fastest in the world. The food, however, is not.  (Well, it may arrive speedily, but it is not your typical sports venue fast food.) Who would have known that we would have a truly gourmet culinary experience at Auto Club Speedway, located 50 miles east of Los Angeles in Fontana, California.  But before I start enticing you with my food descriptions, a few facts about this largest sports venue in Southern California:

World Speed Record: Fastest lap in the world of over 241 miles per hour, set in 2000 and still standing.

Track Size: Two-mile, D-shaped oval—one of the fastest tracks on the NASCAR and INDYCAR circuit. 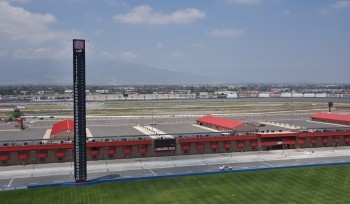 If you aren’t already impressed enough, this outstanding venue also offers a wide range of delicious and innovative food options.

We were fortunate recently to join a group of food writers and other journalists for “A Taste of Auto Club Speedway,” an impressive introduction to the food experiences available at the Speedway. Our tour was well planned and enlightening—so we can write with some expertise about what you can expect when visiting the Speedway.

We were particularly excited to learn about the celebrated Indy Car Race coming up on June 26-27. All the cuisine we tasted will be available during that thrilling race. There will also be an exclusive Southern California Wine and Cheese Festival on the day of the final race, June 27. (More on that coming up.) 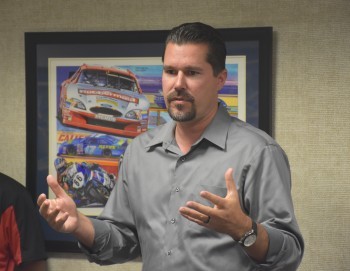 We first gathered in a conference room and met several representatives of the Auto Club Speedway, including its personable president, David Allen, who talked passionately about the exciting happenings at the racetrack. We were taken on a whirlwind tour of the spacious speedway grounds in a comfy tram that fortunately did not go quite as fast as the cars zooming around the tracks. 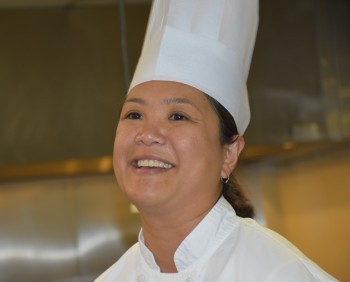 Our first stop was the Americrown Kitchen where we met one of International Speedway Corporation’s (owner of Auto Club Speedway and 12 other tracks) Executive Chefs, Leilani Contemprato, who in her two years on the job has overseen an enticing, creative menu with a full range of options, from casual hamburgers to savory, grilled filets.

In the immaculate, fully-equipped kitchen, we first tasted Fry Town Loaded Fries, a scrumptious take on traditional waffle fries smothered in sloppy joe meat sauce, sliced jalapeno peppers and melted cheese. Then we sampled a mini Hot Lap Burger, made of Angus beef topped with lettuce, tomato, jalapeno and pepper jack cheese. (One of the best burgers I’ve had in a long time.) After these two treats, we had a good idea about some of the more casual food items available to anyone seated in the stands. There are also many other tempting items available around the tracks, from tacos to Thai. 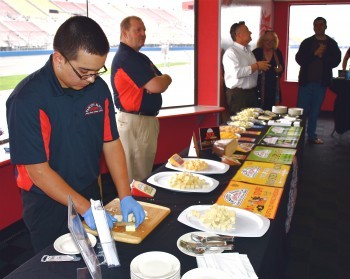 Our next stop was in one of the beautiful Pit Row Suites where we had a preview of the Southern California Wine and Cheese Festival, which will be held on June 27 in the suites before the Indy Car race. We met representatives from New York State’s Yancey’s Fancy Artisan Cheese who offered us a wide array of unique and tasty cheeses, including Buffalo Wing Hot Sauce Cheddar, Roasted Garlic Cheddar, Horseradish Cheddar, Habanero Cheddar, Smoked Gouda with Bacon, and several varieties of cheese curds. These exceptional cheeses were really flavorful and paired beautifully with both the red and white wines served at this tasting. 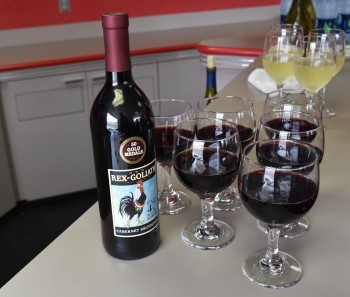 Yancey’s Fancy, the official cheese of Auto Club Speedway, is partnering with Andretti Winery and other California wineries to offer wine tastings, gourmet cheeses and appetizers during the Southern California Wine and Cheese Festival, beginning at 11 a.m. on June 27. For $150 a person, participants can expect a premier spot to watch the exciting MAVTV 500, along with ten different wine tastings and two full glasses of wine, a souvenir wine glass, and a variety of cheese tastings and gourmet appetizers prepared in Chef Leilani’s kitchen.

Many in our group had fun exiting this second-floor suite area by sliding down a winding slide back to where our tram was parked below. Who wants to walk down stairs when you can slide to your destination, even if you end up with a few bruises? 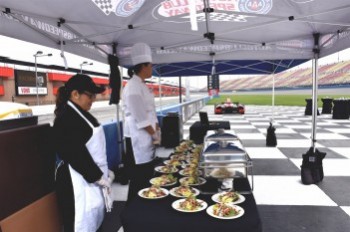 Yes, we were starting to fill up with all these special treats, but now we were headed to an exquisite lunch on Victory Lane served by Chef Leilani and her team. Can you imagine a more exceptional setting for a lovely lunch than right on the racetrack on a gorgeous, sunny Southern California Day?  By now, we were all really relaxed and totally relishing the experience. 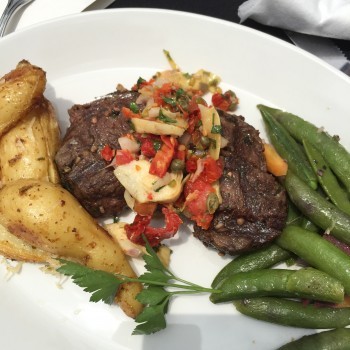 Our lunch was a sampler of what can be ordered in the Premium Suites at the Speedway. We first enjoyed a crispy, tangy Caesar Wedge Salad featuring salami, parmesan, green onions and olives. This unique blending of two favorite traditional salads had everyone raving. But the featured entrée of Grilled Beef Tenderloin was the highlight of this day of fine eating. The ultra tender filet was perfectly pink and deliciously garnished with artichokes, sundried tomatoes and capers. The beautifully presented plate also included parmesan fingerling potatoes, sugar snap peas and carrots. A few sips of icy Hanger 24 Craft Beer were a nice accompaniment to our lunch as the sun came out on the track.

But our culinary tour was still not completed. We boarded the tram for our final stop at the stylish Presidential Suite on a fourth floor overlooking the finish line where we enjoyed delectable desserts and inventive cocktails, including the luscious White Flag (made of rum, coconut milk and pineapple juice) and the refreshing Red Flag (consisting of vodka, white rum, Red Bull, and cranberry juice).

Yes, we were satiated and mellow after such a wonderful day of feasting, but the Speedway wanted to wake us up before we left. So several members of our group had the opportunity to zip around the track in pace cars driven by expert drivers at 120+ miles per hour. 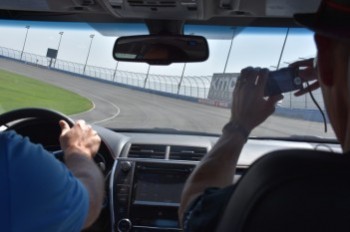 Life-Uncorked’s photographer, Todd Montgomery, hopped in a car and bravely took photos along the way. It was an unparalleled experience at the Auto Club Speedway.

Tickets can be purchased for the MAVTV 500 INDYCAR weekend, June 26-27, and for the Southern California Wine ancd Cheese Festival on June 27 by calling 1-800-944-RACE (7223) or online at autoclubspeedway.com.

Disclaimer:  We were guests of the Auto Club Speedway for this culinary tour, but the opinions in our articles are always completely our own. Our primary goal is always to provide accurate and interesting information to our readers.