Cooking and Working Together at The Wine Artist

“Let the battle begin!” These were the words we heard from MJ Hong, a former HR manager and currently the owner of the Orange County venue, The Wine Artist, in Lake Forest, California (in the Irvine area).

When we walked through the doors of The Wine Artist, we entered a little bit of Tuscany, complete with overstuffed sofas and tapestry hangings. The large bar area is perfect for presenting food and wine. And in the back two expansive cooking areas with long tables were just waiting for our cooking competition (a la The Iron Chef) to begin.

Our mission was to experience a corporate team building activity, one of the many activities The Wine Artist facilitates.

There were ten of us plus our encouraging leader, Linda Kissam. We drew numbers to divide us into two teams and a team captain was selected. Our directions were to prepare two appetizers—one that paired with a Sauvignon Blanc and the second that paired with a Cabernet Sauvignon. MJ directed us to select items from a rolling, shelving unit loaded with canned goods as well as fresh herbs (basil, mint, and cilantro), fruit (papayas, pears, and dried apricots) and vegetables (tomatoes, banana peppers, jalapeno peppers, red and green peppers, jicama, and cucumbers) as well as several meats (chorizo, ground chicken, and ground turkey) and cheeses. MJ told us there would be one secret ingredient we needed to use in all the appetizers, which she would unveil right before we started cooking. 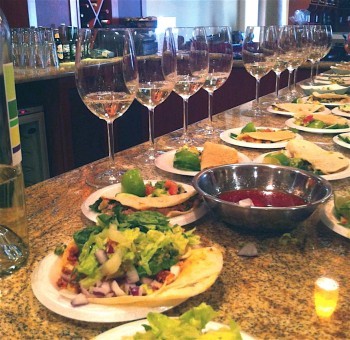 We took our places at our respective cooking stations, and MJ revealed that corn was the secret ingredient. She provided canned corn as well as cream-style corn and fresh corn on the cob. We were told we needed to complete both appetizers in 45 minutes and have them plated for 10 people. Then the big clock on the computer started ticking and minutes elapsed quickly.

The pressure was on! As might be expected, one person on each team emerged as the group leader (and not the team captain, although they did a great job overseeing the cooking process).  Once we had determined our dishes and everyone on the team knew what ingredients needed to be prepared, each person jumped in and announced what contribution would be his/her activity to complete the dish. We were all very excited about the appetizers we had chosen and set to work preparing them. 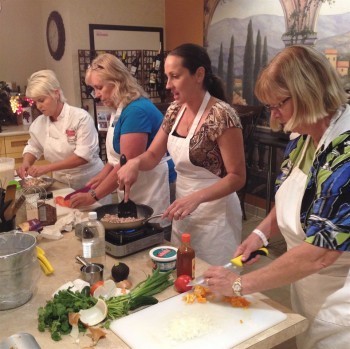 However, just as we were furiously working to complete everything in time, MJ threw a wrench in the plans. Halfway through our preparations and just as we were well into preparing both dishes, she told us to immediately stop what we were doing and switch stations.

I was devastated and indignant, as were my team members when we realized we had to give up on our exciting preparations and start working on the other team’s dishes. Neither team wanted to complete the other team’s undoubtedly inferior creations.

Once we changed cooking stations, both groups were baffled by what had been started by the other team. Our team was confronted with a panko-breaded, raw meatball of some type. We had no idea of the seasoning or type of meat and didn’t want to taste it because it was raw.  How could we determine what sauce to prepare to go with this mysterious meatball? We later found out that the other team was equally confused by the simmering soft, yellow mush awaiting them at our station (which they later realized was polenta with cheese and corn). After several sighs of exasperation, we re-grouped and prepared sauces and added herbs and spices to the dishes. There was a small fire in a nearby trash can, but no one stopped to find out what it was. We remained focused because the clock was ticking. Two minutes before the time was up, we placed our creations on the tasting bar, and we all felt pleased with our masterpieces.

MJ explained to us that this activity was similar to experiences in a corporate setting where one person must complete a project started by another with the goal of achieving the best possible outcome. We learned that no matter how you start, it’s how you finish that really counts.

When we had the opportunity to taste all four appetizers, each group was surprised at the twist given to our original dishes and we actually found some of the other team’s ideas better than our original visions. For instance, our original polenta now included some tangy blue cheese that was a delicious addition and changed the dish from being paired with the Sauvignon Blanc to a pairing with the Cabernet Sauvignon.

We experienced how difficult it was to change and adapt to a new situation and realized the importance of working together as a team. At the end of the competition, MJ asked us what our favorite part of the activity was and, without fail, everyone loved the twist of finishing the other team’s appetizers. 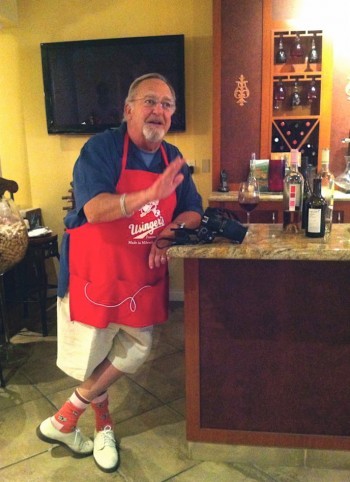 We also enjoyed tasting a variety of excellent UpRoot Wines with our appetizers. These wines are produced by an innovative company with a modern approach to wine-making and marketing. We particularly enjoyed a 2011 Napa Valley Cab ($78) that had classic cab tastes with hints of chocolate and dark cherries. A 2011 Gray Edition Sauvignon Blanc ($44)— named after combining names of UpRoot owners Greg and Jay—was creamy with a strong key lime flavor. A 2013 Rose ($28) was a vibrant blend of Carignane and Syrah that went well with our spicy Mexican appetizers, as did a 2012 Grenache ($46) with strawberry, vanilla and cherry tastes.  We really enjoyed these food-friendly wines. 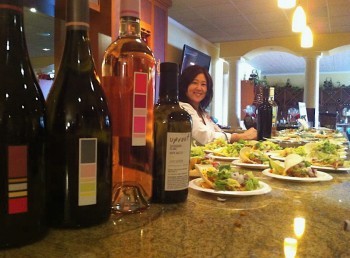 The Wine Artist also produces and serves its own wines. Guests can even create their own personalized wine labels right on site to help them remember their cooking and tasting experience.

The Wine Artist is the perfect place for a corporate team building activity. In addition, it’s also ideal for showers, company parties, wine and cheese pairing seminars, blind wine tastings (or any other kinds of wine tasting you can imagine), seasonal cooking classes, and bachelorette parties. The possibilities are endless. As an example, MJ mentioned that during a recent corporate team building event, a group competed in the Iron Chef cooking competition event and then enjoyed a painting class. Both adults and children can enjoy The Wine Artist for holiday parties with a variety of activities such as Wii, gambling, and karaoke.