Cave at Pala:  Innovative, delicious dining in a stylish setting

Are you looking for fresh, healthy, creative cuisine elegantly served in an exquisite setting?  We just found it. We were recently invited to meet Chef Luciano Cibelli at Pala Casino’s upscale new restaurant, Cave, which just opened the end of May. Not only did we meet the personable and talented chef, but we were able to observe him preparing creative dishes that he then served us. As a food writer, I frequently have the opportunity to taste wonderful dishes, but it’s not too often that I have the chance to observe the preparation process—so this was a real treat.

Palo Casino Spa and Resort, located in Northern San Diego County just off the 76 East and close to the I-15, is owned by the Pala Band of Mission Indians. It is a beautiful full-service resort offering comprehensive gaming, 11 restaurants, outstanding entertainment, and a luxurious hotel; but we were visiting primarily to experience the many wonders of Cave, a modern eatery that features Mediterranean cuisine with an Italian flair. 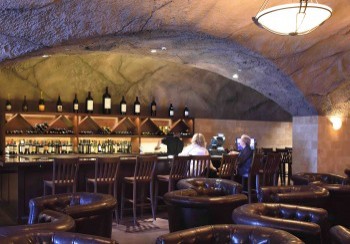 The resort also includes a romantic and unique underground Wine Cave with an extensive selection of wines from around the world (450 labels). The Wine Cave has its own light dining menu and you can enjoy live music on weekends. I decided right away that during my next visit, I will savor a glass of wine and a cheese platter in the Wine Cave before dining upstairs.

Chef Luciano developed his cooking skills as a young man in Milan where he learned his family’s traditional Italian recipes. He then worked and traveled around the world, honing his culinary skills in Germany, Thailand, Spain, the Caribbean, New York City and San Diego where he launched the much celebrated Max Restaurant. (We were impressed to learn that Chef Luciano speaks five languages.) 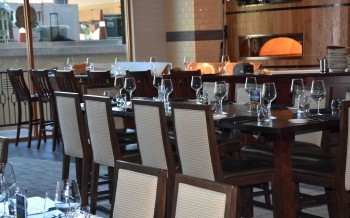 He brought all this experience to Pala in 2003 when he opened and managed the popular Mama’s Cucina Italiana. Cave replaces Mama’s as part of a major renovation. Chef Luciano’s goal with Cave is to present his guests with an innovative menu of dishes highlighting the flavors of the very best ingredients. He also aims for simplicity and showcasing the natural flavors of the food itself, pointing out that “Too much fusion can become confusion.”  He focuses on using fresh, organic ingredients that are locally sourced. The menu is completely different than Mama’s with an emphasis on more protein and fewer carbs—with many fish options. 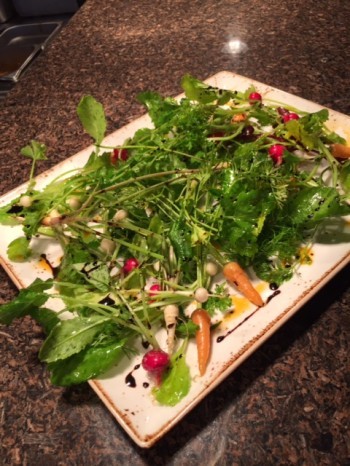 It’s always impressive to me when a restaurant has an open kitchen as Cave does, so guests can observe the preparation process. We first watched Chef Luciano prepare a plate of fresh crisp greens with tiny baby vegetables, including flavorful onions, carrots and radishes. He dressed the salad simply with orange olive oil, balsamic vinegar, and sea salt. The taste was crunchy, a bit zesty, and flavorful.

The next course was grilled octopus, one of the Chef’s favorite dishes. I must admit that I am generally not a fan of octopus since my past experiences have been less than stellar. I usually find the texture too rubbery and the taste too fishy. And then there is the whole idea in my head that I am eating this slithery sea creature. So my plan was to take some nice photos and politely avoid the octopus, but Chef Luciano had another idea for me. He was fairly determined that I would leave his restaurant loving octopus. He first brought out a pan with the whole octopus (delivered directly from the Mediterranean) that had been steaming for about an hour.

The Chef's octopus presentation was enticing. He gave me a knife and fork and invited me to slice a bite, which I did, albeit reluctantly. (It’s fairly awkward to turn down a renown chef when he is personally serving you one of his signature dishes.) The octopus flesh was surprisingly tender to cut and even more tender to chew with no rubbery texture at all. And I must admit that the flavor was sublime—succulent and sweet, almost like lobster. Am I now a fan of octopus?  The answer is a resounding “yes”—as long as Chef Luciano is preparing it. 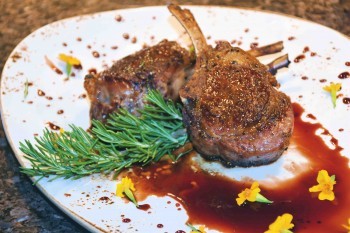 The dishes that followed were equally delicious. We loved the thick double-cut Colorado lamb chops, which the chef salted, peppered and seared in a very hot skillet, and then served with a rich Cabernet reduction that had been drizzled on the plate. The chops were just the right pink color all the way through and very flavorful. 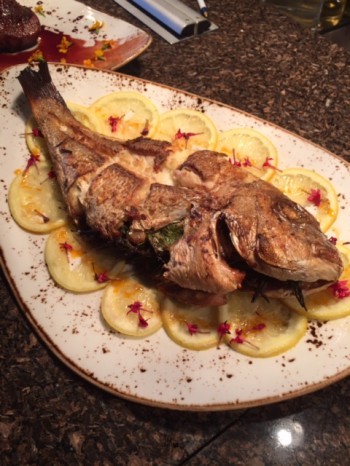 A New Zealand whole wild red snapper was pan seared, stuffed with herbs, and full of mellow sea tastes, accented by tangy lemon zest.  Next were Texas slow-braised quail filets, simply seasoned with salt, pepper and herbs, and then quickly seared in olive oil with a sprig of fresh rosemary. The chef served the quail in a hot skillet on a bed of sautéed tri-colored peppers that had simmered in chicken broth. 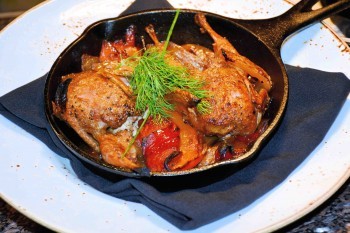 We enjoyed these dishes at the Chef’s suggestion with a lovely, rich Del Dotto Paso Robles Pinot Noir that enhanced their flavors even more. I’m sure all of Chef Luciano’s dishes pair beautifully with many of the outstanding wines available at Cave.

These dishes were representative of Cave’s menu of imaginative, friendly dishes that combine interesting flavors and ingredients, prepared simply and elegantly. The menu also includes a variety of tempting small plates and gourmet flatbreads prepared in Cave's modern wood-fired oven. There are refreshing salads and several homemade pastas that are very popular with guests, such as a chestnut fettuccini carbonara with Porcinic mushrooms and truffles, which I will definitely be ordering during my next visit. 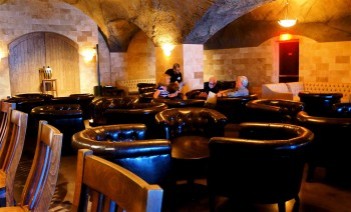 As an added artistic feature, many of Cave’s dishes are served in custom-made wooden bowls or on slabs of olive wood. And, of course, the restaurant has a full bar with craft cocktails and beers, in addition to the beautiful wine list.

When asked what his overall goal is with his menu, Chef Luciano says “I want my guests to have a direct, personal and friendly experience with flavorful dishes that speak directly to their souls.”  I must say that he succeeded during our recent visit. My soul was listening and I left appreciating his passion for creating and presenting inspiring and delcious food.