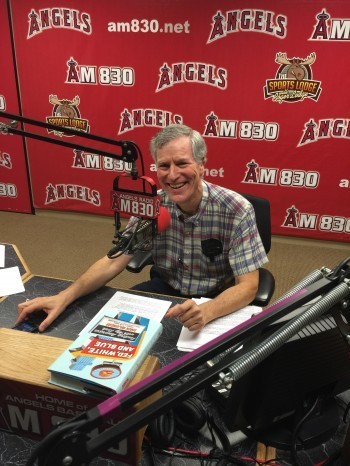 What does it take to successfully host a radio talk show focusing on the extensive culinary scene in Orange County and surrounding areas?  It takes what Andrew Harris, host of the SoCal Restaurant Show on Sports Radio AM 830 KLAA, has—a passion for learning about great chefs and restaurants, a love of good food, an innate ability to connect with people, an articulate and congenial on-air presence, and the tenacity to search out and present great stories for his listeners.

I recently had the unprecedented opportunity to be a guest on the SoCal Restaurant Show and to watch Andrew Harris in action. I could not have been more impressed. That’s why I am voting for his show to be selected as the “Best Food Talk Radio Show” in the 2015 Golden Foodie Awards Competition. The awards will be presented at a festive, red carpet gala on September 27 at the Fairmont Newport Beach.  I will be there (yes, all dressed up) and I hope to see Andrew accept the award.

The Golden Foodie Awards is a prestigious People’s Choice Food Awards competition created three years ago to recognize and celebrate culinary excellence in the Orange County area. It’s the Academy Awards for culinary professionals and those who support them, such as the SoCal Restaurant Show.

To vote for Andrew and his show go to the Golden Foodie Website (click here.)  Click on the big gold VOTE button in the upper right hand corner. Scroll down to the category, “Best Food Talk Radio Show,” and type in “SoCal Restaurant Show.”  You can only vote once and the voting in this category closes on August 7. 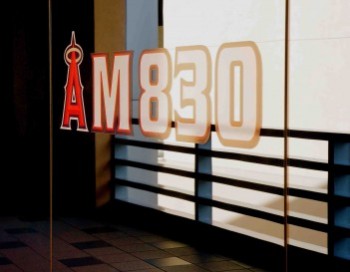 Andrew, a veteran food, wine and travel journalist, has been producing, writing and hosting food radio shows on major southern California AM stations since 1998. He has been hosting the SoCal Restaurant Show for almost three years and is particularly pleased to be presenting his show on AM 830 KLAA since, as the 50,000-Watt Home of Angels baseball, the station’s audience reach is widespread and the demographics are perfect for his kind of show. (I guess if you like baseball, you like good food, and vice versa. I know this applies to me.) The show is broadcast live every Saturday morning from 10 a.m. to noon and is also available via podcasts. We had the opportunity to meet gracious Leslie Koontz, a senior account executive for the Angels, who was our helpful guide around the studio. Later we learned a lot about the dynamics of sports radio from personable and knowledgeable, Bob Agnew, AM 830's program director.

Andrew is obviously passionate about his position as host of the show.  He says, ”I find chefs and restaurateurs some of the most fascinating and generous people I know. Radio gives me the opportunity to bring these personalities alive and share their engaging stories with a wide audience. Every show is a voyage of discovery and it’s absolutely my favorite two hours of the week.” 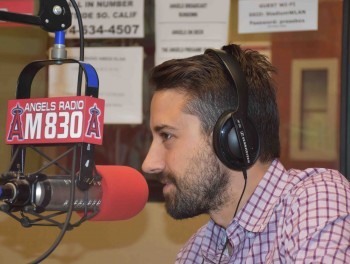 During a recent broadcast, which our group of food writers (from the International Food Wine & Travel Writers Association, known as IFWTWA) attended, we witnessed some fascinating and entertaining interviews.  The co-host of the show during our visit was Executive Chef Andrew Gruel of the rapidly growing Slapfish empire with restaurants in Huntington Beach, Laguna Beach, Newport Beach, LAX and at the University of California-Irvine.

As we observed the show, we were served some mouth-watering delicacies from Slapfish restaurants, including a creamy clam chowder with corn and bacon. We also relished a delicious crab and lobster roll that we kicked up a bit with Slapfish’s own tangy hot sauce. We were pleased to learn that fish from  Slapfish is as fresh as possible and is purchased directly from the fishermen. Slapfish is now on our list of must-go-to stops in the LA area. 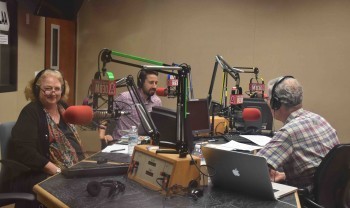 I was the first guest on the show and talked about the many benefits of belonging to IFWTWA and also about our recent trip to the Guadalupe Valley wine country in Baja. In particular, I focused on our rustic but luxurious accommodations at the boutique inn, Casa Mayoral, where we loved the rural, serene setting and the wonderful authentic Mexican breakfast. 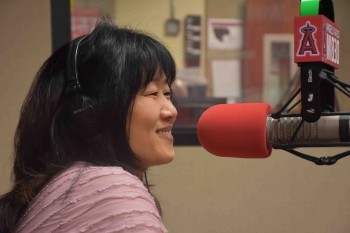 I’ll be writing in more detail later about some of the other guests on the show, but they were all captivating. MJ Hong, the charming owner of The Wine Artist in Laguna Beach, talked about her unique special event venue where she holds cooking classes and team building activities. I have participated in events at The Wine Artist and can personally attest to how enjoyable and well planned they are.

Andrew also interviewed Chef Carla Hall, Daytime Emmy award-winning chef on ABC's "The Chew" and best-selling cookbook author. We were impressed to learn she was recently an honoree at the James Beard Foundation’s Chefs & Champagne benefit in the Hamptons. She was also part of First Lady Michelle Obama’s Presidential Delegation to the World Expo in Milan.

Martin Diedrich, owner of Kean Coffee in Newport Beach and Tustin, was another interesting guest. He talked about producing artisan coffee "from roaster to cup" and actually served us some of the best iced coffee I’ve ever tasted. Personable Bobby Navarro of 100eats.com talked about his event planning and culinary promotions company and his admirable endeavors to provide scholarships to others pursuing the culinary arts. 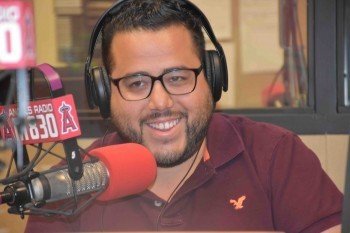 And finally we were enthralled to hear Andrew interview Simon Majumdar, a celebrated food writer and Food TV personality, and author of the recently published Fed, White and Blue—Finding America with my Fork—a book I can't wait to read, which is enticing me from my nightstand right now.  You may recognize Simon as the no-nonsense judge on Food Network’s “Cutthroat Kitchen.” I'll see him soon when he serves as the Master of Ceremonies at the 2015 Golden Foodie Awards. 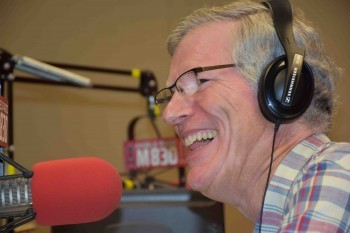 These guests are typical of the diverse, high calibre culinary professionals who appear on the two-hour SoCal Restaurant Show, which seemed to speed by in minutes. We learned it takes a lot of energy and organization to produce such a face-paced, entertaining radio show. It takes someone like Andrew Harris.  I look forward to seeing him on the red carpet at the upcoming 2015 Golden Foodie Awards.  Have you voted yet?  Please do it today. You only have until August 7. Just click here to go to the voting website. It’s a good feeling to recognize someone who is so outstanding in his field.