Wine and the Good Life

We could say “la buena vida” or "a la bonne vie" or simply “to the good life,” as our Occasional Wine Council started 2017 by tasting wines from several romantic destinations around the world.

Beginning of the New Year celebrations should always start with some sparkling wine. A Canals & Nubiola Cava from Catalonia, Spain, bubbled in our glasses. Cava is Spain’s iconic sparkling wine. The name comes from the stone cellars (cavas) where the wine matures.  This cava proved to be very smooth with no bite or aftertaste. We experienced flavors of lemon, apple, and honey. The only negative was that the effervescence died off quickly. At around $30 per bottle, this is the perfect everyday quaffer and good for mimosas. The cava was accompanied by a petite potato filled with crème fraiche and topped with caviar and a sprig of dill. 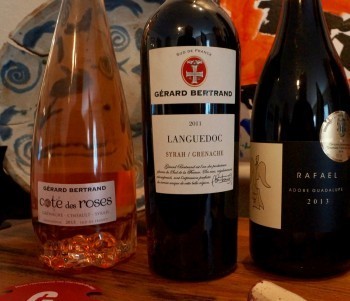 Rosé makes for another light wine to drink at the beginning of an event, and we had a perfect one on our list to sample. The first thing we noticed about Gerard Bertrand's 2015 Côte des Roses was the beautiful bottle, truly worthy of giving as a gift rather than a bouquet of flowers. The bottle was designed by a young designer from the Ecole Boulle, a college of fine arts in Paris. Many times I avoid these types of bottles because I think that the wine couldn’t possibly be as beautiful as the bottle. I was wrong about this wine.

This 2015 blend of Grenache, Cinsault, and Syrah proved to be just how I love rosé wines—with a taste of summer fruits and a nose of rose—fresh, and not cloyingly sweet. It’s a glorious color, too.

We paired it with an appetizer of shrimp, lemon juice, Dijon, garlic, dill, and red onions. This worked so well because the appetizer was light, fresh and didn’t overwhelm the rosé. The Côte des Roses can be purchased at both Costco and BevMo for around $15 a bottle.

Gerard Bertrand’s 2011 Syrah-Grenache, a Rhone Red Blend, made Wine Spectator’s Top 100 list. It comes from the Languedoc (Southern) region of France. When poured, a dark plum color fills your wine glass. Your nose picks up a ripe aroma of Kirsch and dried blueberries. This wine has an earthiness to it with a smokey, chocolate finish. Because of its boldness, it pairs well with barbecue-sauced meatballs. This delectable wine costs around $18 a bottle.

We were asked to compare the Syrah-Grenache with the 2002 Serafiel from the Adobe Guadalupe Vineyard in Baja. The Serafiel, which aged for 10 months in the barrel,  punches a bold, dry flavor, typical of a European-styled wine. It needs to be aerated for at least two hours. Give it some time, and it will open up to a wonderful wine. The Serafiel, named by this vineyard  after one of the seven archangels, is comprised of 80 percent Cabernet and 20 percent Syrah. Your olfactory senses are hit with dark fruit, pepper, and caramel. There is a presence of chocolate and a minerality reflective of the Baja terroir.

The Adobe Guadalupe Winery, where this wine is produced, is an architecturally stunning winery with beautifully appointed plush guest rooms. Elegance abounds in the dining room with crystal, china, and linens. If dining al fresco is what you enjoy, guests can dine on the outdoor patio.  Breakfast is served in the warm and inviting kitchen.

A zesty pizza consisting of shredded sweet potato as the base and topped with tomato sauce, mozzarella, and arugula accompanied the Serafiel. Such an unusual and creative dish!

The Serafiel can be found at both Flower Hill Mall in Del Mar, California, and Truly Fine Wine in San Diego, but you will have to look for a younger vintage since the 2002 is no longer available. The 2011 Serafiel sells for about $42. 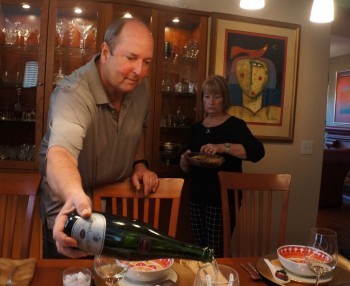 Another delectable wine from Adobe Guadalupe Winery is the 2005 Adobe Guadalupe Miguel ($35), again named after one of the seven archangels. It proved to be a nice blend of Tempranillo, Grenache, and Cabernet Sauvignon. The aroma was the typical leather found in Tempranillo. The Grenache gave the wine the fruit taste of red raspberry and blackberry and yet there was a dry finish. A perfect steak wine!

The 2013 Adobe Guadalupe Rafael, a blend of Cabernet and Nebbiolo ($47), was my favorite of the night. This wine is full-bodied with lots of structure and good acidity. It is a very intense and elegant wine, delighting your mouth with ripe red berries and notes of cinnamon, chocolate, and spice—true to what one expects from these grapes.  It has aged for 12 months in new French and American oak barrels.

As we adjourned the Occasional Wine Council meeting after a very satisfying tasting, we all decided 2017 should be full of many more of these “good life” events.

Photos with this article by Todd Montgomery.