Mount Palomar Winery: a tradition of innovation and excellence 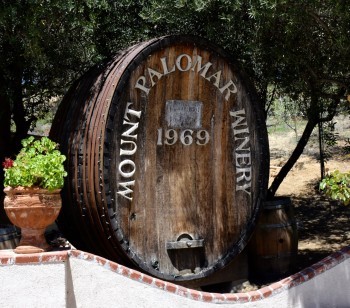 There are many factors that go together to create an exceptional winery experience. While excellent wine may be paramount, superb food, a beautiful setting, and friendly service are also key. We found all this recently at Mount Palomar Winery in the Temecula Valley Wine Country, located about an hour north of San Diego.

Mount Palomar was founded in 1969 when the surrounding area was just a fledgling wine region, making it only the second winery in the valley. Since then it has remained locally owned, but it has evolved over the years, now producing more than 15,000 cases annually from the 25 varietals grown on a portion of its 315 acres. Mount Palomar is one of the largest bottlers in the valley. 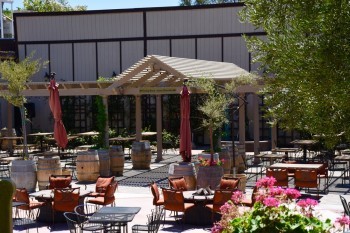 When we walked into Mount Palomar, we were immediately enthralled with the welcoming charm of the winery since it has one of the most picturesque settings in the wine country with a lovely landscaped patio featuring water fountains and classic statues overlooking the vineyards. I could just imagine peacefully relaxing on the beautiful patio with a nice glass of wine. You can also walk up steps to an upper-tier plaza with expansive views of the surrounding rolling hills or take a leisurely stroll through a secluded olive garden. 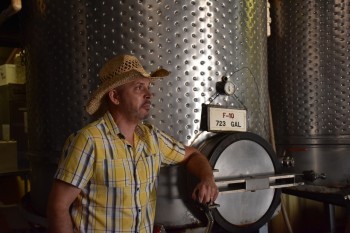 We were pleased to meet the personable winemaker, James Rutherford, who has been at Mount Palomar for 3 ½ years. After growing up in Northern California, he studied winemaking at California Polytechnic State University and worked in wineries on the Central Coast. He is thrilled to be working with so many outstanding and unique varietals at Mount Palomar. His focus is on producing high quality wines that will please a variety of palates. 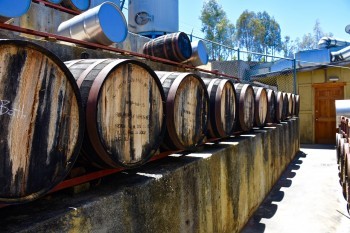 He explained to us that Mount Palomar has one of only two Soleras in the country. Solera, which was established at the winery in 1974, is an historic process for aging wine that involves using a methodical approach to mixing vintages over many years so that no barrel is ever drained and some of the earlier vintages always stay in the barrel. Mount Palomar’s much celebrated Cream Sherry, which is produced in this old school method, is sun baked and aged for at least five years. As a result, when you sip a Mount Palomar sherry, such as the one to be released shortly, you’ll be savoring a bit of the first batch of sherry ever made at the winery. 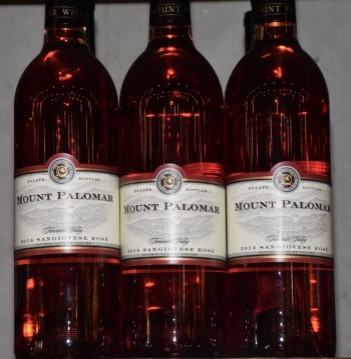 Mount Palomar offers visitors many other award-winning wines with an emphasis on Bordeaux styled blends and Italian varietals. It was the first winery to plant Sangiovese in the Temecula Valley AVA, setting the trend for big reds in the area. The winery’s vineyards are now planted with seven clones of Sangiovese. The 2010 Castelletto Sangiovese we tried was exceptional with bright strawberry tastes and touches of clove and vanilla.  We also loved the 2013 Castelletto Dolcetto with its intense blackberry flavors and nice tannins. In addition, we enjoyed the floral, lively 2013 Castelletto Cortese, made from the Cortese grape, which is rare in California. Another favorite of ours for a hot day, was Shorty’s Bistro White (named after the winery’s former restaurant), a refreshing, fragrant blend with hints of pineapple and peach. 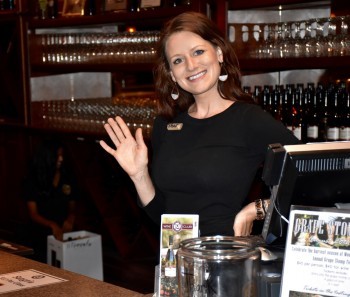 James Rutherford also shared a special wine currently “in progress” called Angelica, a kind of sherry that the early California Spanish missionaries made, which is named after the old pueblo of Los Angeles. Rich with caramel and hazelnut flavors, this is a wine we will return to taste and purchase when it is available next year. I can just imagine sipping it with dessert after a savory Italian pasta dinner.

The tasting room was Mount Palomar’s first barrel room and is actually built into the side of a hill. It may very well be Southern California’s first “wine cave.” The setting is cozy and comfortable with friendly, knowledgeable staff members (such as Shar pictured here) to guide you through your tasting. A pleasant outdoor tasting area is adjacent to the tasting room. A tasting of six wines is available Monday through Thursday for $14 and Friday through Sunday for $18. 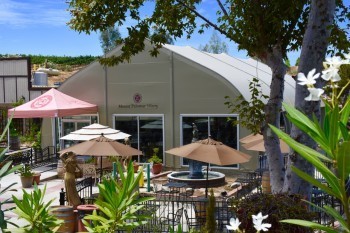 The Annata Bistro and Bar is a recent addition to the winery. (“Annata” is the Italian word for “vintage.”) With its Mediterranean-inspired menu, full service bar (one of only two in the wine country), and spacious indoor and outdoor dining areas, this stylish restaurant is inviting and unique. We were impressed with its signature cocktail menu offering such enticing handcrafted drinks as Laid Back Lemonade (vodka, amaretto, lemonade, mango syrup and soda water) and Mount Palomar Rita (Tequila, Cointreau, Cilantro, Lime, OJ and Agave). Annata’s also features beers on tap. 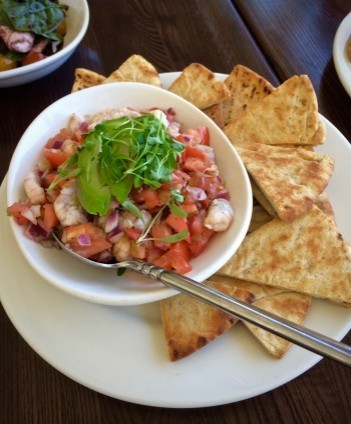 The menu, overseen by talented head chef, Joseph Luna, is innovative and seasonal. During our visit we tried three delicious, made-from-scratch appetizers, including Fresh Ceviche made with white fish, shrimp, tomatoes, onion, garlic, and lemon juice, served with house-made pita chips. This is one of the best ceviches I’ve tasted, and it was particularly delicious when paired with the 2013 Mount Palomar Dry Riesling that was citrusy and refreshing, just like the ceviche.

The Tomato and Mozzarella Salad was also especially tasty with a savory port reduction made from Mount Palomar port, of course. There were so many other items on the menu that appealed to us, including Angel Hair Pasta made with wild mushrooms, spring peas, asparagus, garlic, shallots, herbs, parmesan and Mount Palomar Chardonnay. We learned that one of the most popular menu items is the Palomar Burger topped with horseradish cheddar cheese, bacon, arugula and caramelized red wine onions. All the menu items include suggested wine pairings. While many of the most popular items will remain on the menu, a new updated menu will be available next month.

Annata is open every day for lunch and for dinner on Fridays, Saturdays and Sundays. The dinner menu is expanded with such appealing items as Pan Seared Trout, Grilled Pork Chops and Beef Filet Mignon.

Mount Palomar is a busy, lively place with many activities, including live music on many weekends and special events, such as an upcoming Mystery Dinner. Its thriving wine club offers pick-up parties every other month and its varied facilities are perfect for small or large groups.

Steeped in history but looking to the future, Mount Palomar is a vibrant winery now, but it is not sitting still. Plans have been approved for a major expansion, including a hotel and resort with a large amphitheater for concerts.

Photos taken by Todd Montgomery. This article was first published in Neighbors Newspaper.