Greek wines: a hit in California

On a recent gorgeous Southern California afternoon, we were happily transported to the  green, rolling vineyards of Greece.  Although we were actually sitting on a lushly landscaped patio in San Diego, we truly felt like we were in Greece for a few magical hours. Of course the wine we were sipping helped transport us, particularly as we savored the wines from Domaine Porto Carras and also from the rich Xinomavro grape grown in the famous region of Naoussa.

We tasted more than 20 wines (yes, just tasted). They were all very good and many were outstanding.  Most of us had had only limited experience with Greek wines so this tasting opportunity was exceptional for us.

Before embarking on the Naoussa wines, we started our Greek wine tasting with six wines from Domaine Porto Carras, the largest organic vineyard in Greece, located on the verdant slopes of Mount Meliton overlooking the deep blue waters of the Gulf of Toroneos in Halkidiki. A few weeks ago we had had the pleasure of meeting the owner of Porto Carras, Yliana Stengou, when she visited Southern California, and at the time we were very impressed with her passion for winemaking and her wines. So we looked forward to sampling these wines again.  The Porto Carras wines we tasted were introduced to us by Michael Pavlidis from Old World Vines, which imports the wines to the U.S. (Michael also served as a translator from English into Greek for the Greek wine industry representatives in attendance.)

We first tasted three refreshing white wines. In particular, we enjoyed the 2012 Assyrtiko (100 percent from the Assyrtiko grape), which was crispy, smooth, and luscious. We also loved the 2012 Malagouzia, made 100 percent from the Malagouzia grape, one of the most ancient Greek white varietals. After enjoying this wine’s delicious fruity, floral flavors, we understood why it had just won Gold and Best of Class recognitions from Sunset Magazine’s International Wine Competition.

We also enjoyed some rich reds from Porto Carras, including their popular deep ruby red 2011 Limnio from the Limnio grape, which we learned was Plato’s favorite varietal and was mentioned by Aristotle in his writings. This wine was dry but also enhanced by fruit and cinnamon flavors.  Another great red was the 2010 Magnus Baccata, a bold blend of Cab and Syrah that was spicy, fruit forward, and even imparted hints of chocolate.

We moved on to taste a variety of wonderful wines from the Naoussa region in the heart of Western Madedonia in northern Greece, located on the southeastern slopes of the Vermion mountains.

We enjoyed wines from the following Naoussa wineries:  Kokkinos, Melitzani, Thymiopoulos, Vaeni Naoussa, Chrisohoou, Dalamara, Diamantakos, Elinos, Foundi, Karyda, Kelesidis and Kir Yianni. These were mostly full-bodied, red wines made from the distinctive Xinomavro varietal, which gets its name from the dark, almost black color of the grape’s skin, producing rich tannins. These wines are known for their somewhat earthy tastes of olives and tomatoes.

It wasn’t a surprise that these wines pleased our California palates since the regions where they are produced parallel the different wine regions of California very closely with almost identical latitudes and climates. As in California, these Grecian grapes benefit from plenty of sun and their proximity to the ocean as they grow. Some of these wines are available in the United States while others are produced in relatively small quantities and are only available in Greece.  (But what better reason to visit Greece than to taste these wonderful wines amidst their native terroir? And there are about 630 wineries in Greece so you won’t run out of tasting options.)

I will just touch on a few of the highlights of our tasting, but be assured that if you are fortunate enough to sip wine from any of these wineries you will be very pleased. 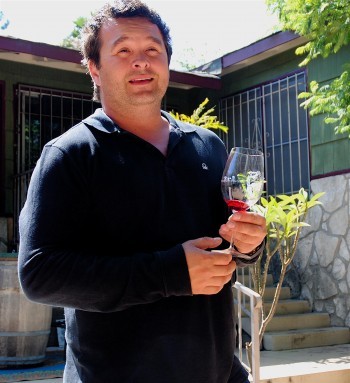 Personable Apostolos Thymiopoulos, the owner and winemaker at Thymiopoulos Vineyards, introduced his own wines plus wines from several other wineries in the region. We really relished his 2012 Young Vines. Not aged in oak, this bright red wine was full of strawberry and cherry fruity flavors, almost like a Beaujolais. It was very smooth and went down nicely, with or without food. The other Thymiopoulos wine we tried was the 2011 Uranos made from very old vines. This deep purple, complex but well-balanced wine had spent 18 months in French and Austrian Oak and was intensely flavored with rich berry and spice tastes. These are definitely wines to watch for and try if you have the opportunity..

Georgia Foundi, winemaker and owner from Foundi Estate, introduced her lovely Estate Foundi 2007 and Naoussea 2008 (The Lady of Naoussa), which had a beautiful ruby color, light fruity flavors, and was well-rounded on the palate with a hint of wood. 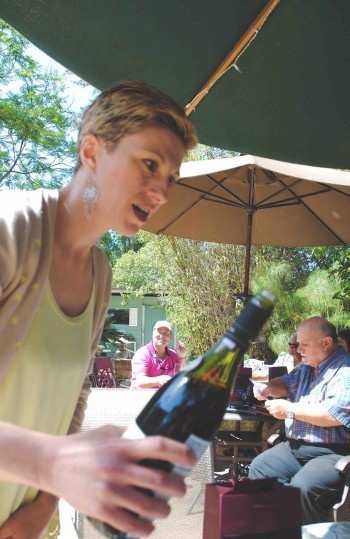 Petros Karydas, owner and winemaker from Domaine Karyda, was there to introduce his winery. We tasted his juicy Karyda Estate Red, a smooth, medium-bodied wine, aged for 24 months in French Oak and produced from grapes grown on a hill in Naoussa called Gastro, a very rich grape-growing region. We loved this wine and were not surprised that it has ratings in the 90s from Parker and Wine and Spirit Magazine.

We also enjoyed two wines from Estate Chrisohoou that had been produced from thirty-year old vines. The 2008 Naoussa had a natural acidity, medium tannins and a bell pepper taste that we felt would be very food-friendly. The deep red 2010 Estate Chrisohoou was produced from drier soil and had an earthy taste, almost reminiscent of truffles.  We also savored wines from Vaeni co-operative presented at the tasting by Yiannis Pliatsikas. Their dry, complex 2008 Naoussa and the rich 2006 Damaskinos were elegant and friendly.

The list of great wines we tasted could go on and on.  Suffice it to say, we tasted many more excellent deep red wines from the Xinomavro grape grown in the Naoussa region and they were consistently well-made and distinctive. I believe I speak for our entire group of wine reviewers when I say we will be enthusiastically touting the virtues of these Naoussa wines for a long time. If you have the opportunity to purchase or taste any wines from this region, I promise that you will not be disappointed.

In California, the Porto Carras, Thymiopoulos and Foundi Wines are available at Hi Time in Costa Mesa and at K&L Wine Merchants in San Francisco, Hollywood and Redwood City.