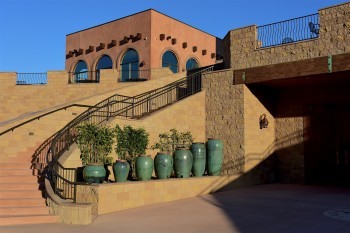 Fazeli Cellars opened last fall in one of Temecula Valley Wine Country’s newest wine tasting venues, located in a majestic Mediterranean-styled building on De Portola Wine Trail atop a hill with one of the most breath-taking views in the valley. We recently talked with personable Bijan “BJ” Fazeli, founder of the winery, about this dream-come-true venture.  BJ has been making wine in the area for eight years. He first sold his wines at the Collective in Old Town Temecula (now called Crush ‘n Brew) and then opened a popular tasting room, which is still open in Old Town. 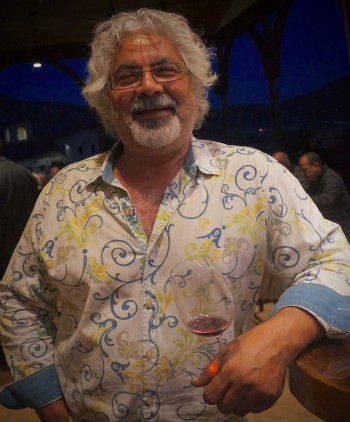 When planning his wine country structure, rather than starting “small,”as many wineries do, BJ started “large” with more than 200,000 square feet of building space that will accommodate events of all sizes. He will soon move in all the equipment needed to produce his wines onsite. BJ describes his building’s architecture as “Modern Moorish” with its combination of A-frames, hexagons, and squares.  At the front of the building are two long winding staircases that symbolize open arms welcoming guests to the winery.

The stylish, spacious tasting room is the centerpiece of the winery. After getting your glass of wine, you can wander outside to the patio and immerse yourself in the stunning panoramic views that surround you from every direction.  BJ situated his tasting room with a southwest view that would capture the maximum amount of sun during the day and the moonrise at night. He points out that “Nature has given us this beautiful art and all we had to do was frame it. So that’s what we have done.” He makes the point that his goal was to create an inspiring experience for his guests and he has certainly done that.

In the construction and design of the building, the goal was to be environmentally friendly so recycled materials are used throughout. BJ is pleased that no trees were cut down to construct the winery. We were particularly enthralled with the counter tops of the two bars in the tasting room that are made of polished walnut with beautiful copper and turquoise swirls. 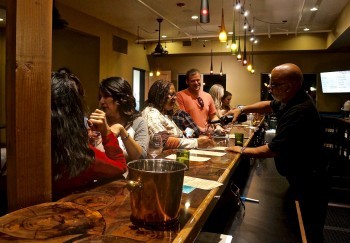 Fazeli Cellars is deeply rooted in BJ’s Persian heritage. Two slogans reflect his inspiration in creating and developing the winery. “Our Roots Run Deep” is etched in concrete at the winery’s entrance. The other slogan is on each Fazeli wine bottle label and reads:  "Inspired by the ancient traditions of Persia, rooted in the modern expressions of California.” BJ points out that Persia has a rich history of making wine. The oldest wine flask ever found, estimated to be 7000 years old, was discovered on the western side of Iran.

BJ also grew up in a family where he learned to appreciate good food and wine. He loves to cook and many of his favorite Middle Eastern dishes are available at the winery’s Baba Joon’s Kitchen, which is open daily from noon to 5 p.m. Why the name?  In Farsi (Persian language), "Baba" means father or grandfather and "Joon" is an affectionate term of endearment that BJ’s grandchildren use when addressing him. 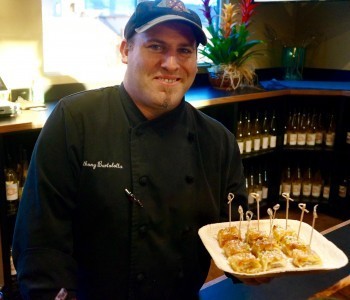 I can attest to how delicious Baba Joon’s food is since I have tried most of the small plates offered, including stuffed grape leaves, beef and chicken kabobs, fava bean hummus, baghlava, plus flatbreads and sandwiches. These dishes pair especially well with Fazeli’s nicely balanced, flavorful wines. Head Chef Anthony Bartolotta does an outstanding job of preparing dishes and running the kitchen. 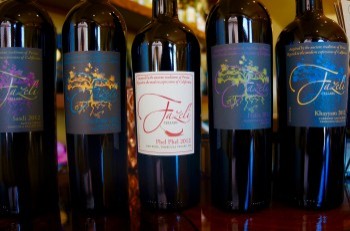 Of course it is the wines that make Fazeli Cellars such an exceptional winery. BJ describes himself as the “blender” so the tastes of the wines are a reflection of his discriminating palate. He is thrilled that Chase Drake is his talented assistant winemaker. Chase, who has extensive experience in growing grapes and producing wine, is the son of Temecula’s well-known vineyard manager, Ben Drake. BJ strongly believes that all good wines start in the vineyard so Fazeli vineyards receive tender, loving care. Almost all Fazeli wines are produced from 47 vineyard acres in Temecula that Fazeli either owns or has leased long-term. Last year, the winery crushed 180 tons of grapes and this year they hope to crush 250 tons. We have tasted almost all of the Fazeli wines, including several that have won prestigious awards, and can attest to their excellence. 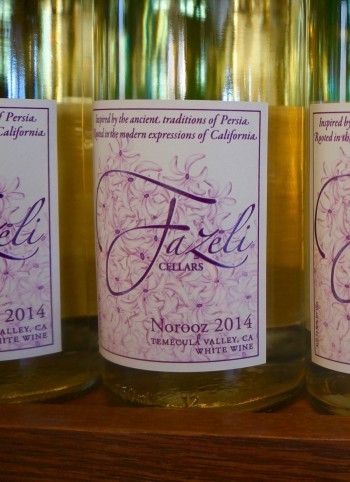 The wines have creative, meaningful names. One wine collection is based on the seasons. Norooz is a refreshing white wine with floral aromas that is named after the beginning of spring or the spring equinox, which also coincides with the beginning of the Persian New Year on March 21st. The hyacinth is the flower associated with spring so you will find it on the wine’s label. Boland Rooz, another lovely, fruity white wine, is named for the longest day of the year, the summer solstice on June 21st.  (Solstices begin on different days depending on where you are in the hemisphere.) The flower symbol on the label is the Sunflower. Mehregan, with its tastes of blackberry, vanilla and spices, refers to the harvest which begins around September 21 and this wine has the wheat symbol on its label. Yalda, a medium-bodied, earthy red, means the winter solstice, the longest night of the year on December 21, and has a pomegranate on its label. 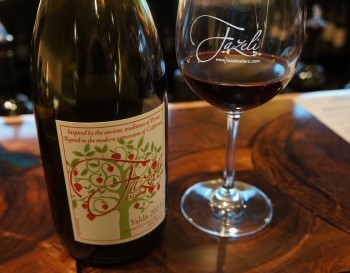 Another collection of wine is imaginatively called Embrace the Chaos. Two wines in this collection are now available: Pandemonium—a rich blend of Cabernet Sauvignon, Petite Sirah, Shiraz and Cab Franc—and Mayhem—a savory blend of Cinsault and Mourvedre. During this coming year, the winery will also produce Uproar and Raucous. There are quite a few other superb wines available, including a Sauvignon Blanc, a Riesling, a Rose, several nice Shiraz wines, and others, including some high end library wines. 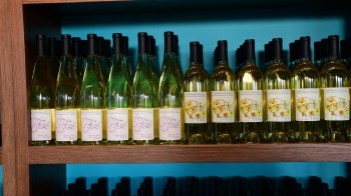 Fazeli has a wine club, the Turquoise Club, that offers discounts and complimentary tastings to guests.  (By the way, turquoise is the winery’s signature color since the Persian Throne is called the Peacock Throne and the peacock has gorgeous turquoise feathers. Each room at the winery has a vivid turquoise wall.) Soon the winery will be announcing a higher tier wine club option called the Ruby Club, which will have even more benefits and its own private lounge.

Fazeli's is planning many special events for guests. Earlier this year, the winery held a unique and very well-attended Mad Hatter Tea Party where the owner and his family got to show off their whimsical sides. BJ was dressed as the Caterpillar and his wife, Wendy, was the Queen of Hearts. One of their daughters dressed as the Cheshire Cat and a son-in-law was the Mad Hatter. In June, the winery will hold a festive and stylish Studio 54 event.  It’s obvious that the Fazeli family wants to have fun with their new venture and they want their guests to have fun too.

We took friends to Fazeli’s last weekend and they had such a wonderful time that they didn’t want to leave. Many more exciting events are planned for the future, but for right now BJ encourages you to stop by and have a wonderful experience enjoying the ambiance, the view and, of course, the wine.

Photos taken by Todd Montgomery. An earlier version of this article was first published in Neighbors Newspaper.