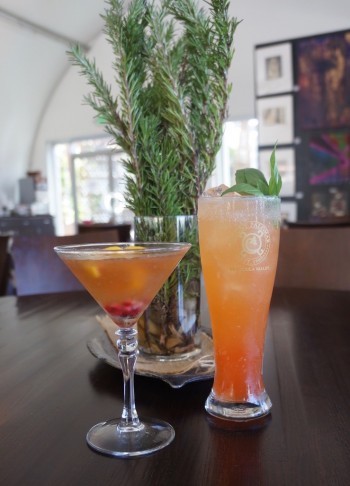 Cooler temperatures bring about thoughts of cocktails made with more spice and seasonal fruit such as the deep red color of pomegranate. Annata Bistro/Bar at Mount Palomar Winery, located in the Temecula Valley Wine Country north of San Diego, has created several new cocktails just for the fall season, and I was on a journey to sample them with a group of fellow writers who are members of the International Food Wine and Travel Writers Association. 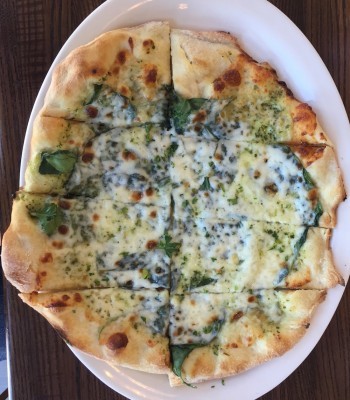 Of course good cocktails are better when paired with delectable food. We were treated to Beef and Lamb Kabobs served with Greek Tzatziki, a classic Caesar Salad, Roasted Red Pepper and Classic Hummus with Pita Chips, and a White Flatbread of Chicken, Mozzarella, Alfredo Sauce, Crispy Onions, and Parmesan. 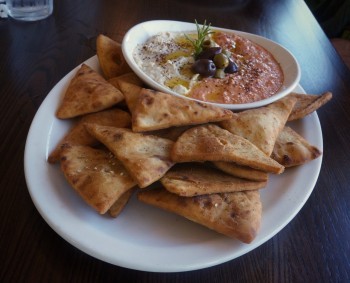 These appetizers and entrees are all found on Annata’s menu. Annata’s chef, Ronnie Chavez, described his food as “cheeky,” a new term for most of us. When asked what that meant, he said, “A little bit daring and a little bit fun.”

Before leaving Mount Palomar Winery, we met James Rutherford, the winemaker, who is experienced in cultivation and vinting of varietals from France, Spain, Italy, and Germany, many of which are planted at Mount Palomar Winery. An interesting fact is that Rutherford, CA, in the Napa region, is named after his family because at one time his family settled and owned a large part of Napa Valley and produced wine there while California was still part of Mexico. 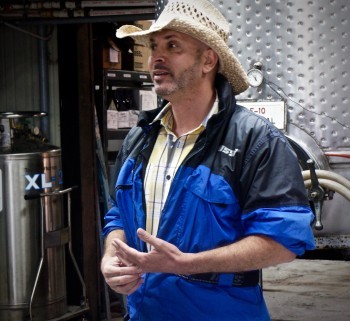 One of the real treats at this winery is Solera Cream Sherry, a sweet and fortified dessert wine originally developed in Spain. Mount Palomar Winery produces its sherry in the same original manner of aging sherry in barrels outdoors in the California sun. 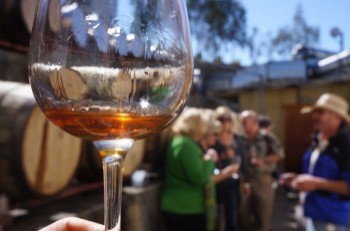 Using this Solera method, sherry is aged for a minimum of five years and is blended from one year to the next—and, therefore, there is still some of the 1974 Sherry from the original year in each bottle. All this aging develops a rich hazelnut and caramel flavor with a smooth finish. Mount Palomar has one of the only Solares in California.

Annata Bistro/Bar is open every day from 11-6 pm and on Friday, Saturday, and Sunday from 11-8 pm. There is usually live music on Saturday and Sunday on the patio from 1-4 pm.  Mount Palomar Winery is located at 33820 Rancho California Road in Temecula, California.

Right now you can receive a coupon for a 2-for-1 wine tasting that is good Monday-Thursday at: https://www.mountpalomarwinery.com/trips