My friends and colleagues refer to me as a cocktail maven.  I like to experiment with different spirits and liqueurs.  When I encounter an exceptional cocktail, I appreciate the challenge of trying to replicate the recipe.  I also enjoy creating my own signature cocktails.  A friend recently asked me to recall the time I concocted my first cocktail.  Assuming my experimentation during my college years with Sloe Gin and strawberry milkshakes with my college roommate doesn’t count, I would say I arrived rather late on to the cocktail scene.  The year was 2003, the month was September, and we were living in Northern Virginia, just outside Washington, D.C. Hurricane Isabel was traveling up the Atlantic Coast and my husband, a National Guard Bureau operations branch chief, was away working with civil authorities.  Both of my children were attending west coast universities; so it was just me, home alone, with my two kitties. 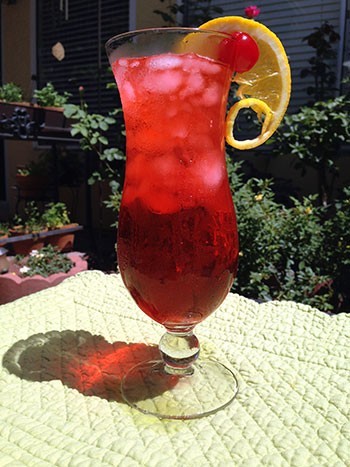 During a phone conversation with my friend, Mary, who was originally from Mississippi, I learned about the custom of drinking hurricanes during tropical storms.  She gave me a list of ingredients: rum, pineapple juice, and grenadine. As a west coast girl, inexperienced with tropical storms, I quickly came to the conclusion that making a hurricane drink would be the best way for me to remain calm during my first encounter with the real thing. So I went to the kitchen, and without much forethought, filled a glass with ice, poured in about a couple of ounces of rum, a small single serving can of pineapple juice (that I luckily found in the pantry), stirred in some grenadine (which I kept on hand for making Shirley Temples or Roy Rogers drinks for young visitors), and scurried down to the basement with my kitties.  Needless to say, I was able to stay cool, calm, and collected until the hurricane passed through the area.

Subsequently, after doing some research, I discovered that the drink originated at Pat O’Brien’s Bar in the New Orleans French Quarter.  It was created in the 1940s by Mr. O’Brien as a way to dispose of his overabundance of rum. He served the drink in a hurricane-lamp shaped glass, thus the eponymous name. A garnish of a cherry and a slice of orange completed the drink. Today, Pat O’Brien’s Hurricane Cocktail Mix can be purchased at most local stores, or via the Internet.  Although the original drink included passion fruit, many different versions have evolved.  While experimenting with various rums and fruit juices to devise my own hurricane drink, I became intrigued with the art and craft of mixology, and I later went on to duplicate or create many of my own cocktail recipes to share with friends and family.  Here is a recipe for one of my favorite hurricane concoctions:

juice from half a lime

Place the above ingredients into a cocktail shaker that has been half filled with ice.  Shake vigorously for 30 seconds.  Strain into a large hurricane glass or a highball glass filled with fresh crushed ice. Garnish with a cherry and a slice of orange. Makes one absolutely delicious serving.

The Cocktail Corner is a regular column on Life-Uncorked.  Our cocktail guru and mixologist, Linda Stewart, wears many hats (epicurean, wordsmith, educator and devoted grandma), but we like her hat best when she is mixing cocktails.