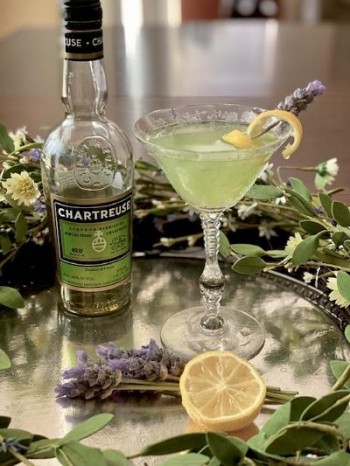 I love lavender.  I love its intoxicating fragrance.  I love its vibrant violet color.  I love its delicate flavor.  And, I love its aromatic essence in cocktails.  This perennial flowering plant is a member of the mint family.  It is thought to originate in the Mediterranean area, but is now cultivated all over the world.  Known for its heavenly scent and calming characteristics, it brings an ethereal quality to culinary dishes and libations.  A lavender cocktail is like a flower garden in a glass.

I’ve learned that in creating cocktails, each ingredient contributes its own special element, which in combination with the other components of the drink, produces a complex flavor profile, thereby confirming Aristotle’s statement, “The whole is greater than the sum of the parts.”  In researching for a congruent liqueur that would amplify the distinctive flavor aspects of lavender in a martini, I discovered Green Chartreuse.  The roots of this liqueur go back to 1605, when monks at the Grand Chartreuse Monastery (located in the Chartreuse Mountains of France) were given a recipe for an herbal elixir by a French diplomat.  Using the recipe as a foundation, the monks created a 130-ingredient liqueur which they distilled and promoted as a medicinal “elixir of long life.”  A sweeter, less-pronounced herbal version, called Yellow Chartreuse, was developed in 1838.  Today, only two monks know the secret recipe of herbs that comprise both Chartreuse liqueurs. 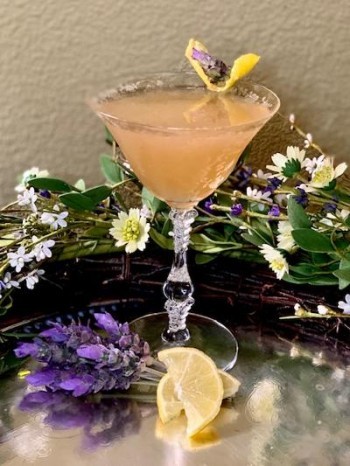 My inspiration for the Lavender Sidecar is from one of my favorite lines in Auntie Mame, requesting her morning meal, “…bring me a light breakfast — black coffee and a Sidecar.”  A Sidecar is a French twist on the Margarita; it substitutes Cognac (brandy) for the tequila.  Named after the attached sidecar of a motorcycle, the history of this drink is not definitive.  It’s alleged to have been created at Harry’s New York Bar in Paris shortly after WWI, the bar famously frequented by Ernest Hemingway, Thornton Wilder, F. Scott Fitzgerald, and George Gershwin.  Harry’s Bar was also a favorite of the fictional character James Bond.

Both cocktails are made with the following lavender simple syrup recipe.  The syrup will last a couple of weeks in the fridge or several months in the freezer. The color of the syrup is a light green, not lavender.  You can use food color or butterfly pea blossom tea to give the syrup (and the cocktail) a purple appearance.  Make sure that when you purchase lavender to use in food or beverages, you look for “culinary” lavender.  The best flavored lavender to use in cooking is English Lavender.  You can grow your own lavender to use for culinary purposes if it has not been sprayed with pesticides.

Bring water, sugar, honey, and lavender just to a boil in a saucepan, gently stirring until sugar is dissolved.  Lower heat and simmer for about 3 minutes.  Remove from heat and let steep for one hour.  Strain into a glass container. Cover and store in refrigerator for up to two weeks.  Syrup will last several months if stored in the freezer.

Place all ingredients into a cocktail shaker filled with ice; shake well.  Strain into a martini glass.  Garnish with a lemon twist.  Makes one cocktail.

Place all ingredients into a cocktail shaker filled with ice; shake for at least 30 seconds to encourage ice crystals.  Strain into a coupe or Nick and Nora glass.  Garnish with lemon, lavender flower, or mint leaves.  Makes one cocktail.