Apple Cocktails:  A Toast to Fall

Autumn colors of red, gold, and orange splash across the landscape.  Jack Frost greets us in the morning.  Leaves crunch beneath our feet.  Apple season has arrived in all its glory, along with fresh pressed apple cider.  This refreshing autumn treat is delicious chilled or mulled, and lends a marvelous flavor to cocktails.  It also makes fabulous brandy…French apple brandy…Calvados.

Calvados is produced in the eponymous area of France located in the region of Lower Normandy.  Over 200 varieties of apples are grown there, and many brandies are made from the juice of over 100 different types of apples.  After fermentation and distillation, Calvados is aged in oak for at least two years, often longer.  Calvados is governed by three appellations:  Calvados, Calvados Pays d’Auge, and Calvados Domfrontais.  Over two-thirds of the apple brandy is from the Calvados appellation, double distillation is required in the Pays d’Auge appellation, and brandy from the Domfrontais appellation consists of 30% pear juice.  Calvados is a little pricey, but in my opinion, well worth it because of the sophisticated apple essence and fruit purity that give it an earthy sensation on the palate.

What better way to welcome the cooler days of fall than with the comforting flavors that we associate with this time of year?  These flavors emerge with perfection in the following apple cider and apple brandy based cocktails.  Cider and Brandy are versatile flavors, and they work especially well when paired with Bourbon.  The spice of cinnamon enhances the character.  The following drink, Apple Cider Bourbon, is an autumn seasonal favorite cocktail. 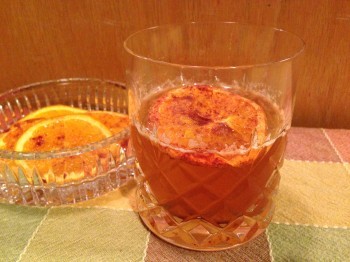 In a small bowl, combine sugar and cinnamon.  Place water in a saucepan and stir in sugar-cinnamon. Stir in honey and cook over medium heat until it just starts to boil. Remove from the heat, bring to room temperature, and place in a covered container.  The syrup should keep for a couple of months in the refrigerator.

Place bourbon, Calvados, apple cider, and honey-cinnamon simple syrup in a cocktail shaker.  Fill cocktail shaker ¾ full with ice.  Shake vigorously for 20 seconds.  Pour into a chilled rocks glass with a couple of large ice cubes.  (Fill large, silicone ice cube trays with distilled water for bigger, clearer ice cubes.)  Garnish with a wide slice of orange peel, or with a Caramelized Cinnamon Orange Slice:  Mix 1 Tbs. sugar with 2 tsp. cinnamon.  Place orange slices on a baking sheet lined with parchment paper; sprinkle the slices with sugar-cinnamon; drizzle each slice with honey.  Bake at 350 degrees for 30 minutes.  This orange garnish is similar to the Burnt Orange Slice, which I wrote about in the September Cocktail Corner’s "Team Colored Cocktails for Your Tailgating Pleasure."

Apple cider and Calvados can also help us transition from summer to fall and from dinner to dessert in the following luscious libation. An added plus is that Calvados has long been considered a digestive aid.  This cocktail is a trifecta of sweet, smooth, and spicy.  The spice flavor is derived from the Goldschläger, a Swiss cinnamon schnapps liqueur with tiny slivers of gold flakes. 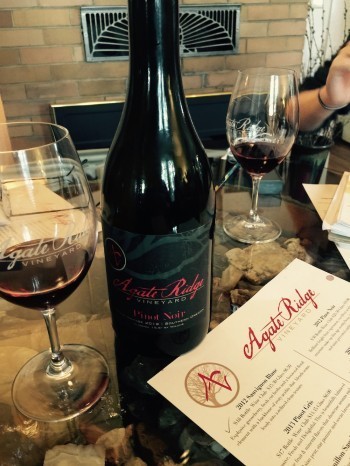 Place above ingredients into a cocktail shaker that has been filled ¾ full with ice.  Shake vigorously for 20 to 30 seconds.  Pour into a chilled sugar-cinnamon rimmed martini glass (recipe below**).  Garnish with a cross section slice of apple.

**Sugar-Cinnamon Rim:  Mix 3 parts sugar with 1 part cinnamon and a dash of salt.  (The salt cuts the   saccharine taste.)  Rub a chilled martini glass rim with a cut lemon, and dip into cinnamon-sugar mixture.