Who did it at Europa?

Recently, Europa Village Winery in the Temecula Valley Wine Country presented another one of its stellar dinner theatre events.  The mystery this time was “Trouble at the Tropicana.” Some of us (of a certain age) may recall the infamous Tropicana Nightclub, a favorite mob hangout and a popular venue for Desi Arnaz’s Cuban band. A sequence in the original Godfather was even filmed there.  So it was the perfect setting for Lucy, Ricky, Ethel and Fred to perform their sidesplitting shenanigans. Yes, a murder did take place and the audience had to figure out “whodunit”—a challenge since everyone had a motive.

With mellow lighting in a nightclub-like setting full of mystery and ambiance, Europa’s Cave was perfect for the crime scene and also for another of Chef Dean Thomas’ wonderful meals.  Expertly directed by Brittany Campbell and cleverly scripted by Tony Lou Productions, the play was presented in three acts between courses. Ricky, played by Justin Duchi, was the perfect suave, charismatic bandleader, always wary of his wife’s ongoing antics.  Lucy, played by Beverly Baker, wanted to be a star as usual and she and Ethel, played by Tiffany Aptaker, hilariously impersonated gangsters in order to get into the nightclub. Fred was played by Europa favorite, John Campbell, whose booming voice and comic facial expressions enhanced his role as Ethel’s bumbling but loveable husband. Shaye Leeper, playing Celia B. DeMilo, was the quintessential dumb, gorgeous blonde bombshell. The notorious gangster, Mr. Big, was hysterically played by Luigi Monteleone. As these colorful characters frolicked about our tables, we all felt like we were part of the nightclub scene. 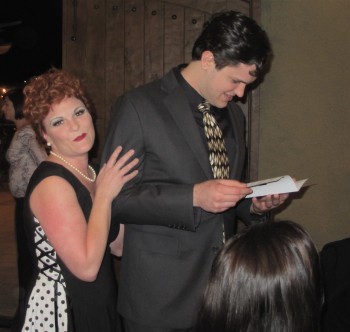 As the play progressed, we were treated to one of Chef Dean’s delicious meals.  Our first course, creatively served in a mason jar, was a creamy porcini bisque with a delicate puff pastry in chive oil floating on top.  (I learned this pastry is called a fleuron.)

The main course was a chardonnay smoked, sea-salted chicken breast served with local Peltzer Farms vegetables, including leeks, fingerling potatoes, carrots and braised edamame. This was not your usual dry chicken dish served at big gatherings. It was tender and rich with unique flavors, which were enhanced by two C’est la Vie Europa wines at our table: the fruity and well-balanced 2012 Viognier and the elegant, smoky 2011 Syrah with hints of blackberry.

The dessert was a beautifully presented, delectable pear tart tatin with candied yams, estate grapefruit, and pomegranates on a vanilla bean crème sauce.  Chef Dean explained that the tarte tatin was first created by accident at the Hotel Tatin in Lamotte-Beuvron, France, in 1898.  (The recipe for this unique dessert was graciously supplied to us by Chef Dean and is at the end of this article.)

So the food was really good and the bad guy was really bad, probably just like it was at the original Tropicana. Fortunately, the bad guy was the victim and he played dead really well. But if you want to know who did it, you will just have to guess. Suffice it to say, it was a wonderful evening of uproarious entertainment in a lovely setting.

Europa has a variety of theatrical and musical presentations going on frequently. A listing of upcoming events can be found on Europa's website, where tickets can also be purchased. Europa Village Winery is located about an hour from San Diego or Riverside and an hour-and-a-half from Los Angeles. It is located in the heart of the Temecula Valley Wine Country, which makes an ideal destination for a day or weekend getaway. You can also stay at the charming Inn at Europa Village located on a picturesque hillside above the tasting room.

Begin by peeling and coring the apples; cut the apples in half or quarters; place into either an individual large muffin pan or a ten-inch deep dish cake pan.  Top with the butter and the sugar. Cover with the dough and bake at 350 for 45 minutes until apples and sugar have caramelized. Remove from oven and cover the dough with a large-sized pan. Immediately turn it upside down and allow the tart to fall. Allow it to cool to room temperature and serve with your favorite vanilla ice cream or cream Anglaise.