The sun had just set. The lights were low. The music was lilting. The wine at first sparkled and then was deep and rich. The food was beautifully presented and accented with aphrodisiacs that added to the evening’s ambiance. It was Valentine’s Day weekend at Europa Village Winery and the evening was spellbinding. Europa is located in the Temecula Valley Wine Country, about an hour northeast of San Diego and less than two hours from almost anywhere in Orange or Los Angeles counties. 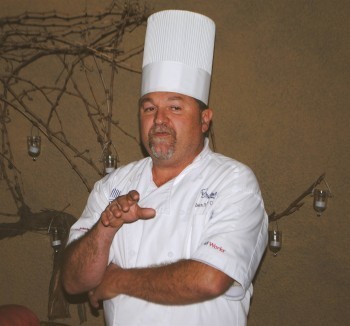 It was another of the winery’s now famous wine pairing dinners prepared by Chef Dean, but this evening was even more exceptional than usual—not just because of the food and wine, but because of the enthralling entertainment. The show and dinner were presented in Europa’s cave room, an intimate cabaret setting where we sipped wonderful wine and savored gourmet cuisine while watching the show unfold right before us.

The enchanting musical we enjoyed was the first act of a 1988 Broadway hit, Romance/Romance with the script and lyrics by Barry Harman and music by Keith Herrmann. It is the story of two late 19th century aristocrats in Vienna who tire of their identities and feel they will be more successful at love if they are disguised.  Europa’s captivating rendition was expertly directed by Daniel Baca. The musical director and accompanist was the very talented Victoria Mora-Collins who set the tone for an evening of romance.

The singing actors were all outstanding as they sang a litany of clever and melodious lyrics. I especially liked the songs, “It’s Not Too Late” and “Yes, It’s Love.”  (After all, we all like to hear that’s it’s never too late to fall in love or to be in love.)  Ashley Taft played the role of beguiling Josefine who was tired of her social climbing life and pretended to be a seamstress while Joey Sims was both sly and charming as the upper class playboy, Alfred, who pretended to be a starving poet. I am always thrilled when John Campbell is in a Europa production. This time, with his booming baritone, he played various supportive roles (Emil, Fritz, “Him”) while effervescent Brandi Lacy played Mitzi, Lina and “Her.”  Needless to say, since it was Valentine’s Day, the lovers ended up together after some entertaining ups and downs.

At the beginning of the evening, Chef Dean described his menu and emphasized the focus on aphrodisiacs, which, of course, are foods that have a reputation for sparking romance. We started our enticing feast in Europa’s tasting room where we sipped the newly released, sparkling 2012 Annabel Brut, appropriately named after Europa owner Dan Stephenson’s late mother. It is a crisp, bubbly wine full of elegance, just like its namesake. And it was perfectly matched with luscious smoked oysters (a legendary aphrodisiac) on fingerling potatoes with crème fraiche and caviar.

We then adjourned to the dimly lit cave room where tables with flickering candles were beautifully set to evoke a magical, romantic mood.  As a first course, Chef Dean outdid himself with one of his innovative creations: cheese cannelloni in a lobster and fennel sauce with a crispy apple slaw. The accompanying 2014 C’est La Vie Viognier was mellow and light, enhancing the savory flavors of the cannelloni dish. 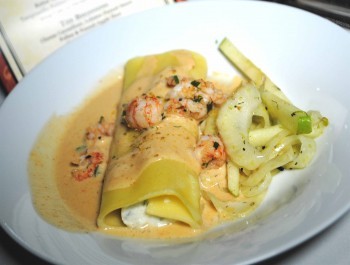 The salad of butter lettuce, shaved Manchego, Tempranillo pickled onions, and a mustard vinaigrette with truffle flavors (another aphrodisiac) was full of unique flavors and nicely paired with the creamy 2014 C’est La Vie Sauvignon Blanc with hints of peaches and lime.

The delicious main course was java rubbed beef tenderloin that was melt-in-your-mouth tender and full of flavor, sitting atop sherry mushrooms and accompanied by truffled (there it is again) parsnips, crispy haricot vert, and a garlic roasted tomato. This was paired with the bold, berry-forward 2010 C’est La Vie Cabernet Sauvignon that brought a tasty richness to the dish. 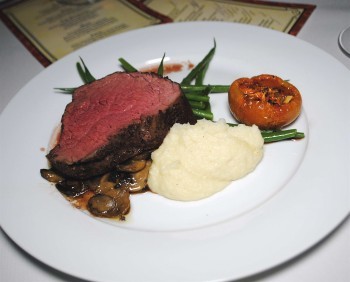 And finally the grand finale: white chocolate and passion fruit mousse (making it a double whammy aphrodisiac) on a pomegranate and banana brûlée. This creamy dessert was full of subtle fruit flavors that combined to make it a unique and delectable dessert. (My friend, Linda Milks, loved it so much that she promises to try it herself at home and I plan to be there when that happens). Aromatic C’est La Vie’s Late Harvest Vin Blanc was the perfect match with hints of pear and vanilla on the palate.

It was another unparalleled event at Europa, but there are many special occasions at this enterprising winery.  Go to Events on the winery’s website for information on an array of exciting upcoming events.