In preparing for a July Fourth beach getaway with friends, I looked at photos from past holidays for inspiration for celebratory cocktails.  One of the most fun, and quite decorative, was a tray of Jell-O-shots.  These Jell-O-shots were also quite tasty.  Now all I had to do was recall the recipe.  After some research and necessary experimentation, I developed a recipe that can be tweaked for other holidays or celebrations by changing the liquor and color, concentrating on non-competitive flavors that will gel (sorry for the pun, I couldn’t resist).  Since these shots have three colors (red, white, and blue), I used vodka in the top and bottom layers, and a flavored liquor, Coconut Rum, in the middle layer. Consistency is another important element for success. The gelatin needs to be firm enough to set, but soft enough to scoop out of the shot glass.  To help remove the gelatin, you can top each shot with a cellophaned toothpick, which also doubles as a decoration.

Note:  Chill the liquor and water in the refrigerator before adding to gelatin. 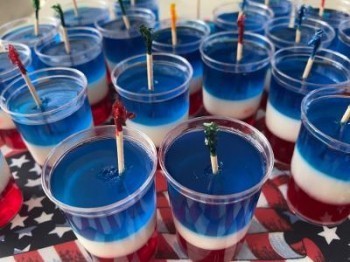 For each Jell-O layer:  Place gelatin in a bowl or pitcher; pour over boiling water and whisk continuously until gelatin is dissolved.  Stir in cold water and vodka.

For white layer:  Sprinkle unflavored gelatin over coconut milk and let “bloom” for 1 to 2 minutes.  Whisk in boiling water until gelatin is dissolved.  Stir in coconut rum and sugar.