As the Downton Abbey Season 5 premiere approached, our dear friend Linda Bramante suggested we have Downton Abbey viewing parties.  We would alternate watching the program at our homes, and the dress code of the evening would be comfy jammies and slippers.  We would each bring an appetizer or dessert, and of course there would be a cocktail.  Linda Milks offered to have our first viewing party at her home (our group has a plethora of Lindas).  She did some research on British themed cocktails and discovered a marvelous spiked punch called Regent’s Punch. Pre-dating the cocktail, spirited punches became popular in the early 17th century.  This punch, from the reign of King George III, is actually named after his son, Prince of Wales George Augustus Frederick (the future King George IV), whom Parliament chose in effect, to rule the country as Prince Regent because of his father’s mental illness.  This was called the Regency Era and lasted nine years (1811 to 1820), until King George III’s death.  The Prince Regent had his own problems, mainly with overindulgences, but he did know a good drink. 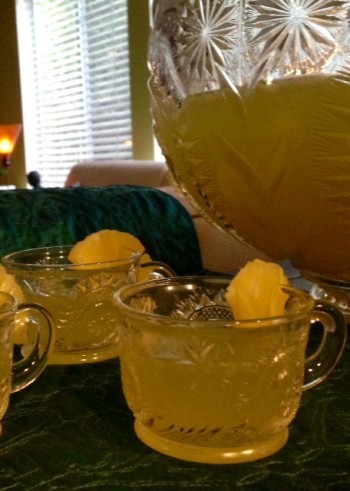 Like many punches of its time, Regent’s Punch calls for Batavia Arrack.  This exotic rum-like spirit was originally produced in Indonesia, more specifically the island of Java (formerly the island of Batavia). It is made from sugarcane and fermented red rice.  The Dutch East India Company brought Batavia Arrack to Europe.  Because of the spirit’s ability to enhance aromatics such as spice and citrus, it became a popular ingredient in punch.  Although Batavia Arrack is starting to reemerge onto the cocktail scene, tracking down Batavia Arrack today can be somewhat challenging.  Check your local alcohol beverage store for Batavia Arrack Van Oosten Java Red Rice Distillate.  In the Los Angeles area it is carried by Wally’s Wine, which ships to some states.  Easier to find substitutes for Batavia Arrack may be Banks 5 Island Rum (which actually contains some Batavia Arrack) or Cachaca Brazilian Rum.  Cachaca should be readily available throughout the country.

Another popular ingredient used in the classic punch is Maraschino liqueur.  Made from tart Marasca cherries and crushed cherry pits, it is one of the few liqueurs that is distilled.  Dry, with a peppery pine taste and sharp almond finish, it has no resemblance to the bright, red-dyed Maraschino cherries found in the neighborhood grocery store. Fortunately, Maraschino liquor is available in many liquor stores.

Cut pineapple rings in half, soak in some rum, and set aside for garnish. Peel slices of rind from the lemon and the orange (being careful not to get any white pith) and place in a large bowl.  Add sugar and muddle.  Juice the fruit and combine with the sugar and citrus peels.  Brew green tea and stir into the mixture until sugar is dissolved.  Let cool.

I devised the following cocktail in celebration of the ladies of Downton Abbey. The drinks of choice during the first two seasons of Downton Abbey were aperitifs, digestifs, wine, and Lord Grantham’s favorite, Scotch.  The cocktail arrived to Downton Abbey during Season Three, along with the end of WWI. When Lord Grantham asks his mother, the Dowager Countess, if he could tempt her with “one of these new cocktails,” she replied, “I don’t think so.  They look too exciting for this early in the evening.”  Made with Crème de Violette and lavender simple syrup, I would like to think that this cocktail would entice one of my favorite characters, Lady Violet, Dowager Countess of Grantham. 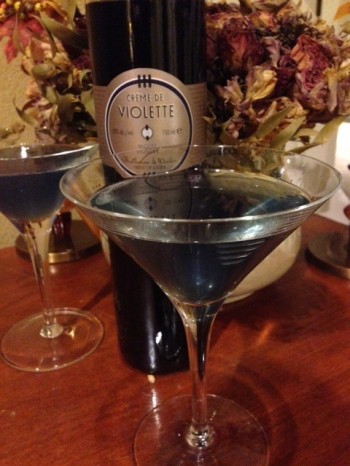 *Lavender simple syrup: Combine 1 cup of sugar with 1 cup of water in a medium saucepan. Bring mixture to a boil, stirring until sugar is dissolved.  Sprinkle in 1 heaping tablespoon of culinary lavender.  Reduce heat and simmer for about 3 minutes. Remove pan from heat and allow lavender to steep in syrup for 20 minutes.  Strain into a container.  Place on a tight lid and keep in the refrigerator.  It will last for a couple of months.  The color will most likely be a greenish-blue, as the culinary lavender includes the leaves of the herb. The ratio of sugar to water of 1:1 is the one most commonly used in cocktails, although some mixologists prefer a “rich” simple syrup, which is double the sugar for a 2:1 ratio of sugar to water.  I prefer the 1:1 ratio, but it is merely a personal preference.